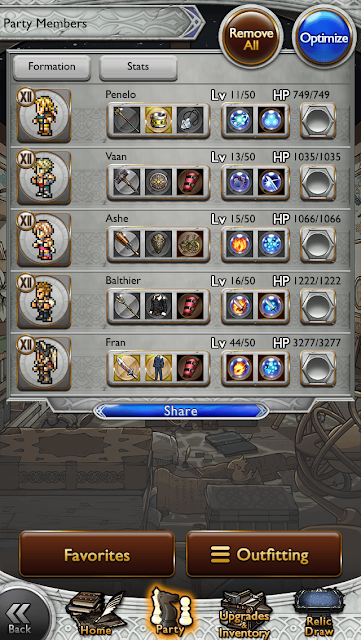 Last year, I made Final Fantasy Record Keeper my favourite game of the year, simply because I got incredibly addicted to it and a mobile phone game had never had that effect on me. The fact a game I loved playing lived in my pocket at all times was really cool. It was like having a baby Final Fantasy with me at all times and it had enough of it's own deep mechanics to keep me interested for months. It's nostalgic story summaries also pushed me to finally play the classic PS One game Final Fantasy IX, another one of my favourites from last year. I got so into Final Fantasy Record Keeper that I actually banned myself from it, because it was taking time away too much from my real life and I was getting behind on my Japanese study because that's what I usually did on my phone before Record Keeper entered my life and my phone.

I'm back on the Record Keeper bandwagon again, thanks to one of the recent events presenting the opportunity to win one of my favourite Final Fantasy X characters Rikku. What I immediately noticed coming back to Record Keeper was that the interface has been upgraded to be so much simpler but smarter than it was before. There are also a lot of new features, such as Augmentations, Soul Breaks and Shattering Abilities, which make the experience so polished that I'm genuinely impressed at the game's growth while I've been gone. Since all the changes were a bit overwhelmingly different at first, I didn't play it enough to win Rikku in time, but staying in the game has made me see that all these changes have tremendously improved the game's interface and most aspects of playing. If you haven't come back to Final Fantasy Record Keeper for awhile, here's some of what you can enjoy in the game now. 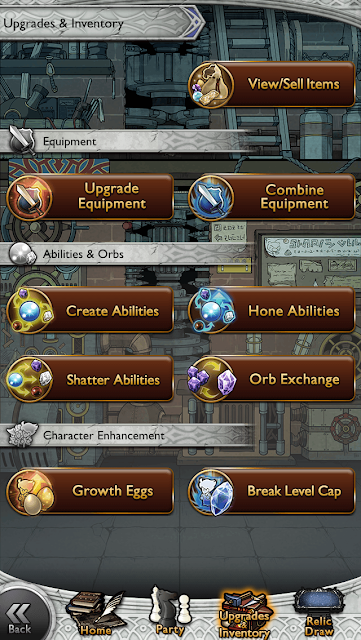 As a player for a significant amount of time before, a problem I had a lot was having too many weapons or abilities, which mean needing to expand my inventory space often with Mythrils (Record Keeper's alternative currency to real money). The problem also wasn't as simple as just having too much in my inventory, but also having doubles of abilities and weapons too. Doubles of weapons don't serve as such a big issue as they can be combined or used as upgrade materials for weapon upgrades. Double abilities however, especially of lower level abilities, are somewhat useless. They are sellable, but the profit made off them is low. It wasn't a great system, but it wasn't a big issue until I realised how great the new Shattering Abilities mechanic is.

With Shattering Abilities, you can get half the materials that were or would have been used to create the Ability. This is extremely useful, as some five star materials are more difficult to make than others. Not only that, but you can now combine materials to make higher level equipment, making it a little easier to get high level orbs and abilities now. The ability making, inventory and orb collecting situation is at the best place it's ever been and even as a smaller aspect of the game, it's a great change.

Another constant problem with Inventory space was gaining upgrade materials for weapons and armour tended to fill up the inventory very quickly. I'd be doing the daily equipment material dungeons, only to be constantly told my inventory was full. Then I'd have to take a few minutes before entering each dungeon to see what I have doubles of. It was a bit of a chore, unless you have a ridiculous amount of space or were willing to use some Mythrils to get it.

Fear not now though! Upgrade materials seem to count as separate to equipment now. This meant that when I logged in for the first time in ages expecting to be overloaded in my inventory, I had a decent amount of space because my materials weren't there. I've only recently needed to sell or use equipment to enter some dungeons and my inventory fills up much less quickly, a much appreciated change! Also, it's easily to browse when choosing equipment too. It's just better!

Plenty of Rewards, Plenty of Dungeons - Now Well-Organised and Prettier!

So many dungeons have been added to the game and frankly I'm still overwhelmed by the sheer amount I need to tackle. The Realm Menu has added a bar to the bottom where you can tap which dungeon you want, a much more efficient system than just scrolling through. It also lists above each world how many dungeons you've completed and mastered, making it actually possible to keep track of what you need to do without entering each world like you had to before.

Dungeon rewards have also leveled up. You can now win crazy equipment upgrade materials and even some character's Memory Crystals from the Elite Dungeons, along with extra characters being available to win in the Class Dungeons. And this is only in the Realms Section, events are still giving out more and more rare gear as usual. 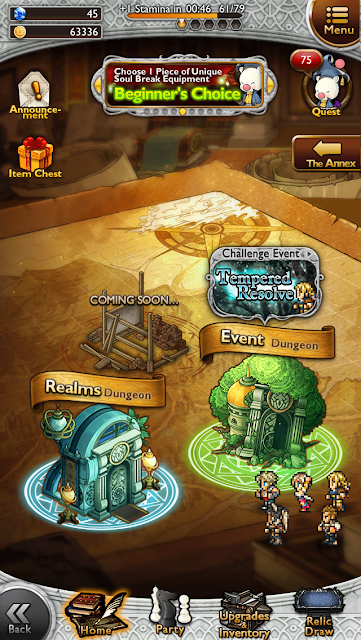 All of Record Keeper's menus have had a bit of overhaul to be smarter, more efficient and intuitive. Both Event and Realm Dungeons can now be accessed on the same screen. This isn't just any menu though - you can see your pixelated party jump eagerly towards whichever option you choose, which is such a charming addition and makes me grin every time I see it. There's a separate menu for adding and charging party members and what they have equipped, which is so much better than using the old equipment screens that I remember to be separate. Upgrades have their own section to and you can see every kind of possible upgrade on the one screen. I didn't have an issue with the menus previously, but the new ones are perfect to get the player into what they're thinking of doing much faster. 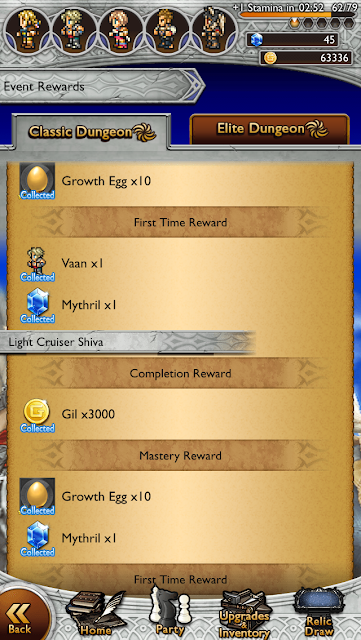 Newcomers Are Well Looked After

Even as a past player, I'm overwhelmed by all of Record Keeper's additions and things to do, let alone gathering equipment, abilities, Gil and leveling my characters for the first time. But Record Keeper knows it's a big, deep game, so it's making Growth Eggs and good equipment available in events regularly and making events cater to both new and old players. There's also mechanics like Roaming Warrior that allow a fellow Record Keeper playing to assist your party with two Soul Break attacks, which I can definitely say has been useful to quickly kill certain bosses and get exp very quickly.

At the moment, on your first Rare Mythril Draw, players can also grab an extra piece of Soul Break Equipment during the One Time Only Beginner's Choice event which is running through September, so I recommend that to anyone who is interested in starting or returning to these.

It's Still Easy To Pay For Free

With the free game being fun half a year on, Final Fantasy Record Keeper is a game still worth playing for those without the time for a story game. It's fun gameplay is still great, but now it's menus and upgrade systems are up to an equally great standard and new features and constant new events keep things fresh for a long time. Just don't get addicted like I did. (Or do. It's pretty fun!)