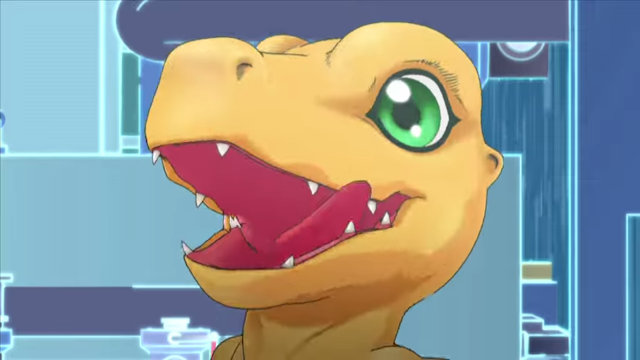 The highlight of watching Digimon when I was growing up was definitely the Digivolutions. Rookie Digimon are really cute and charming, but in the show they were often put up against crazy huge beasts and it would be unrealistic to think those little Digimon could stand a chance. So appropriately, they Digivolve into equally large beasts and then proceed to kick a lot of butt while looking really cool. These Digivolutions include monstrous Dinosaurs, Wolves and Birds and the best thing about these forms was that they could Digivolve again into even more powerful forms such as Ultimate and Mega Digimon that have epic god-like powers, a huge contrast to their Rookie form. This kind of evolution kept me guessing what the next form would be and huge Digimon like WarGreymon and Omnimon always surpassed my expectations of power and general coolness.

When playing Digimon Story Cyber Sleuth, I was pleased to find it's Digivolution system is a big part of the game. There are many benefits in Cyber Sleuth to Digivolving your Digimon, such as unlocking gates that lead to main story events that can only be unlocked if you have certain level of Digimon and of course, having the strongest party possible. For players of past Digimon games or even other games with monster evolution like Pokemon, Cyber Sleuth's Digivolution system adds it's own spin on the system by adding various different requirements to Digivolving into your favourite Digimon.

The Digivolution process begins in the DigiLab, Cyber Sleuth's hub for powering up the Digimon in your party and your Digibank (because yes, there are so many Digimon you need a bank). When you choose a Digimon you want to Digivolve, if you haven't met the Digimon before, you'll see a shadow, kind of like a 'Who's that Pokemon' guessing game. If it's a smaller Digimon, you'll probably have a few options to choose from, so depending on your guessing skills you could either get a really good Digimon or bad Digimon (good examples being Numemon or Sukamon). As you meet these Digimon during battles or through evolution, these shadows turn into pictures of the Digimon which makes things easier to choose. I've met a lot of Digimon now as I'm far in the game, but if there's an option of a mystery Digimon, I'll always take it because I love the element of surprise.

Choosing a Digimon to Digivolve into is only a small part of the Digivolution process. To Digivolve at all, you need to meet some requirements. Some Digimon only require a few requirements, like getting to a certain level and fulfilling certain stats. 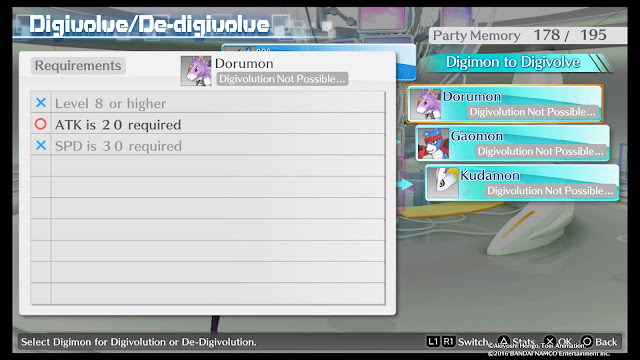 Other Digimon require many special requirements, ranging from stats, to story events to quests being completed. It's hard to know when you'll even be able to do the story events of quests, which adds another element of mystery to the process. 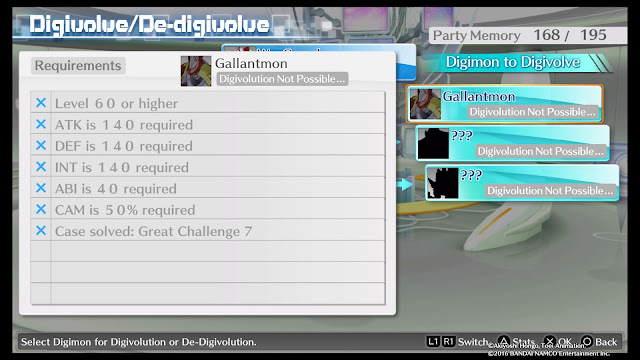 Not only is this system good for appropriately progressing the through the game without being ridiculously OP, but it also makes me excited for what may be the end game quests and incentive to play further.

Most stat requirements are easy enough to raise, but two stats are more difficult than the rest - ABI and CAM. CAM is your 'Comradery level' with your Digimon, which is raised by having the Digimon in your party or using items. ABI is a more difficult to raise, as it's based on how many times you've Digivolved or De-Digivolved your Digimon. This isn't a problem for most Rookie and Champion Digimon, but when trying for strong Ultimate and Mega Digimon, I found myself De-Digivolving and Digivolving back and forth multiple times. This process may sound annoying, but I actually really like that Cyber Sleuth makes you work a little more for the powerful, God-like Digimon and considering how much stronger they are than the lower forms, I think it's fair. Most games if you grind your characters enough, you can become OP, but this system makes things much more interesting and challenging.

I've almost finished Digimon Story Cyber Sleuth, but this kind of system really makes me want to come back and play it again after I'm done. I'm excited to see all the strong Digimon that I'll still need to complete quests to create and I'm sure they'll be well worth the wait. Of all the games I've played with creature evolution, I'm happy to say that so far, Digimon Story Cyber Sleuth has my favourite evolution system. It makes me very eager to check out the new Digimon Story game for PS Vita that's being released in Japan in a few weeks, but for now, I'm going to finish the game and then hunt down some legendary Digital Monsters.


You can pick up Digimon Story Cyber Sleuth from Play-Asia.com!

What do you think of Digimon Story Cyber Sleuth and it's Digivolution system? And since I'm keen for more games like this, what are some other games with great evolution systems?
Leave a comment below or send me a tweet at @JRPGJungle and let's talk!