I've had friends ask me if Pokemon is everywhere, if I can find underwear vending machines and if I've eaten my body weight in sushi yet. While the last part may be true thanks to the seven conveinence stores in walking distance from my Tokyo apartment, the one thing I have found to be taking over Japan is a 3DS game and now popular anime series, Yokai Watch.

I've posted a little on Yokai Watch before, but to summarise it's a highly popular ghost capturing JRPG aimed towards a younger audience. It has been compared to Pokemon before by Kotaku and Yokai Watch II was one of Japan's top selling games last year, selling over five million copies.

As someone who has a small interest in the game and a little knowledge of it's popularity, I was still not prepared for the onslaught of Yokai Watch merchandise I would see pretty much everywhere I went. I've seen toilet paper (which I couldn't take a photo of sadly), to candy to I don't even know, here's just some of the Yokai Watch merch I've seen throughout convenience stores and supermarkets in Tokyo.
(Which by the way, this doesn't include all of the toy stores that are indeed full of the Yokai Watch toys.) 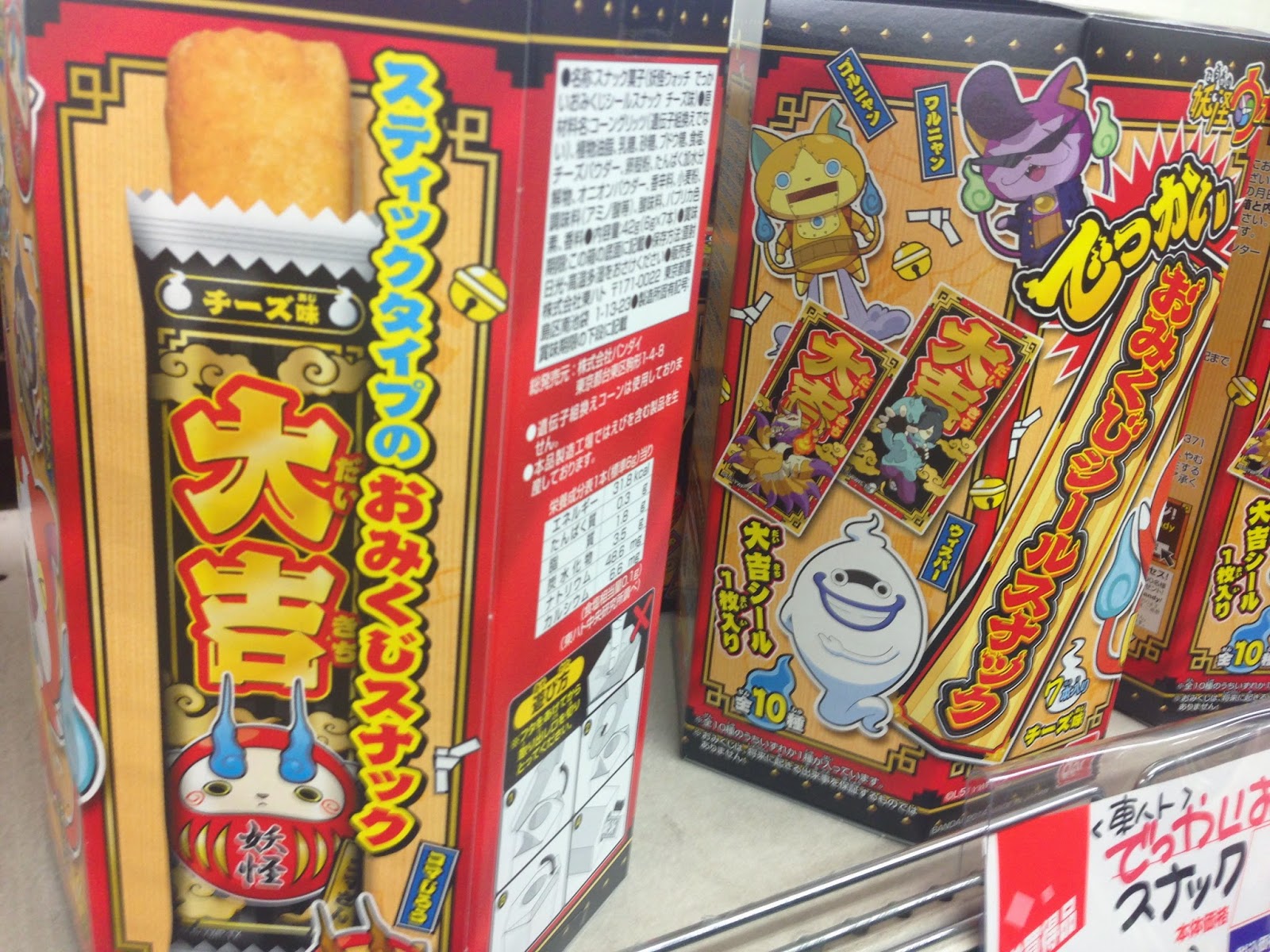 In a Japanese supermarket, some sort of Yokai Watch cheese bar? 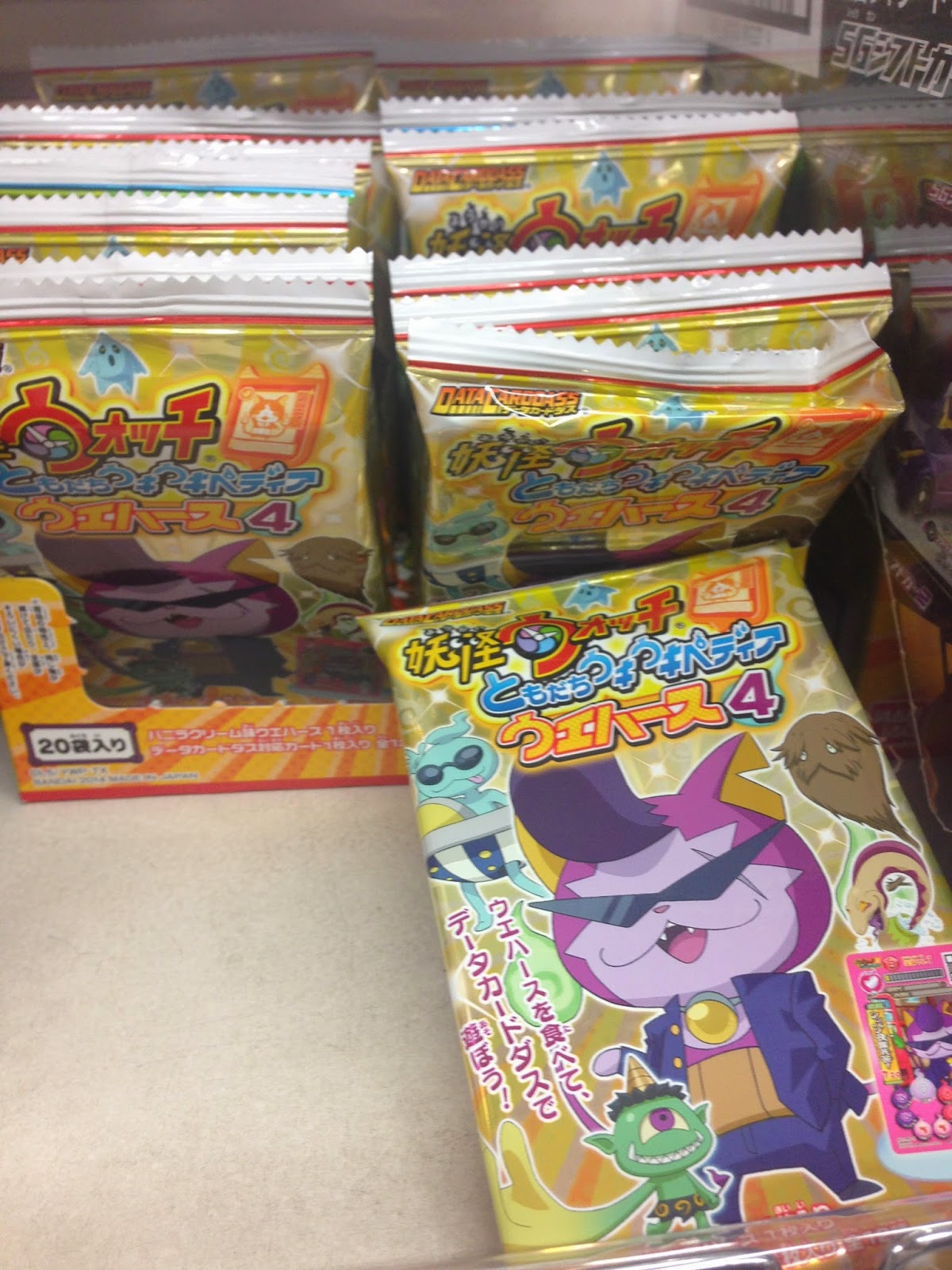 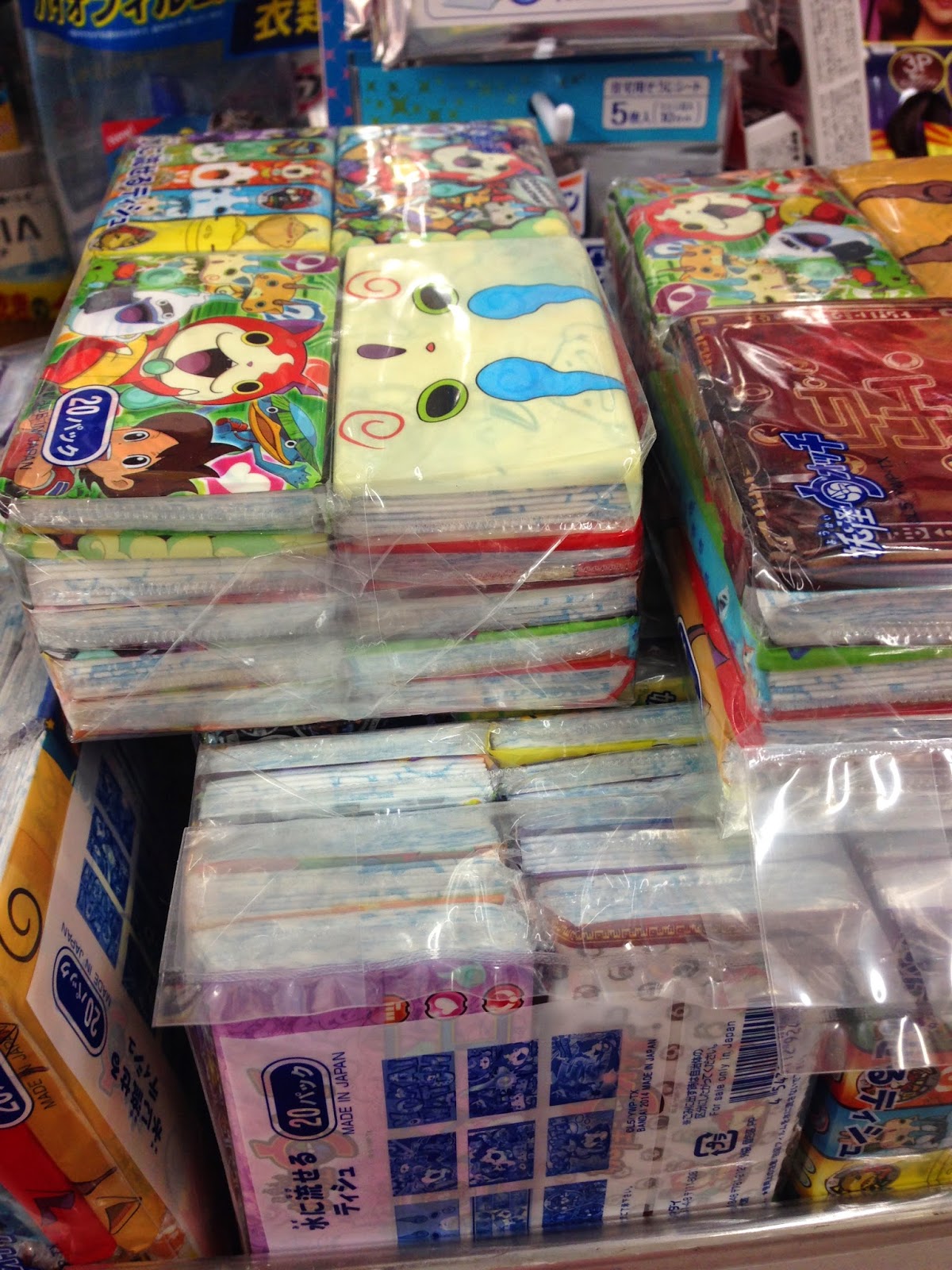 Yokai Watch tissues, for when you need a ghost to wipe your nose for you. 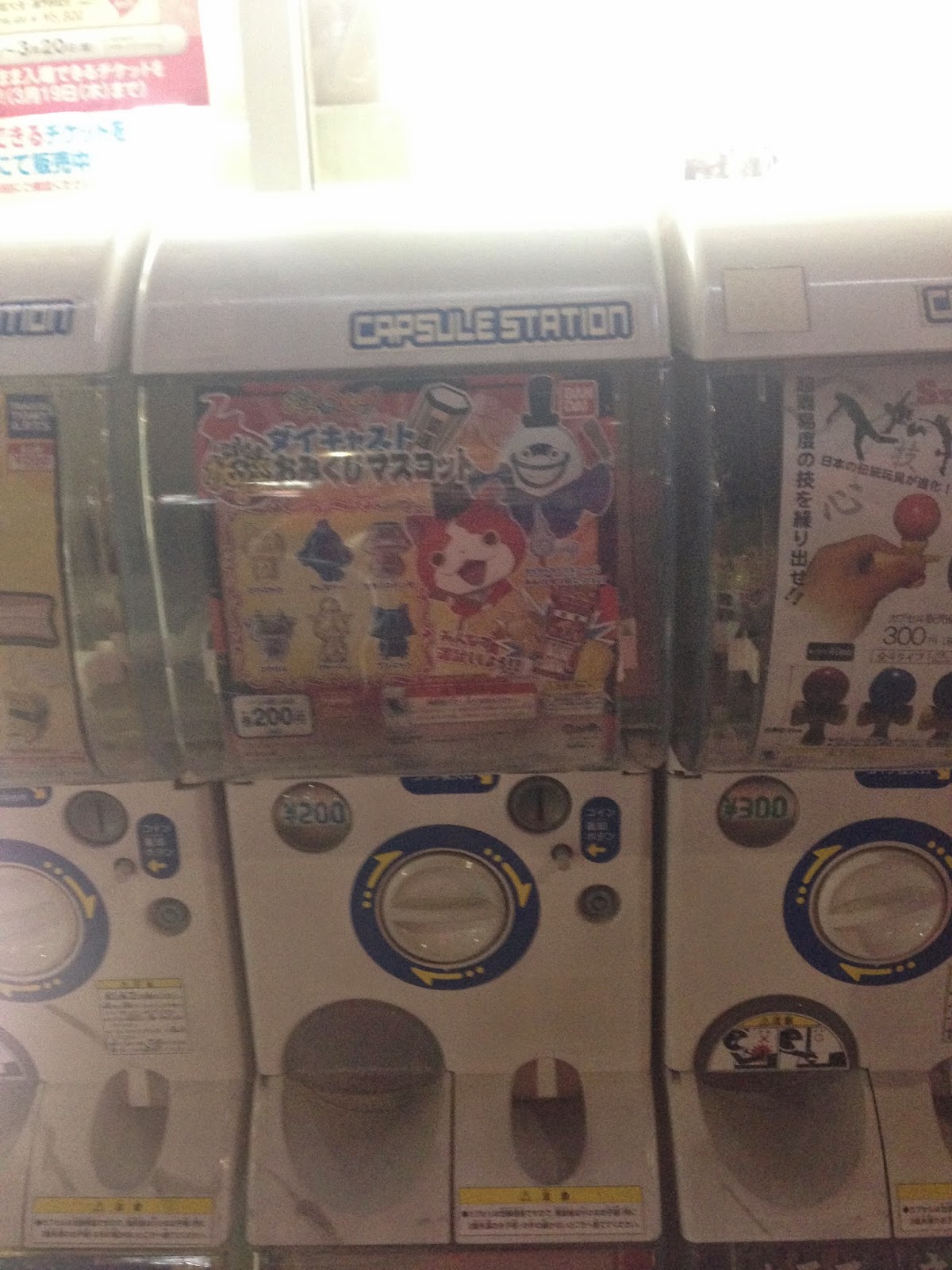 A Yokai Watch capsule machine. Capsule machine's are pretty common in Tokyo around convenience stores and grocery stores. While Attack on Titan and Sailor Moon have a presence with these, Yokai Watch will usually always be at least one of the machines in a group of them. 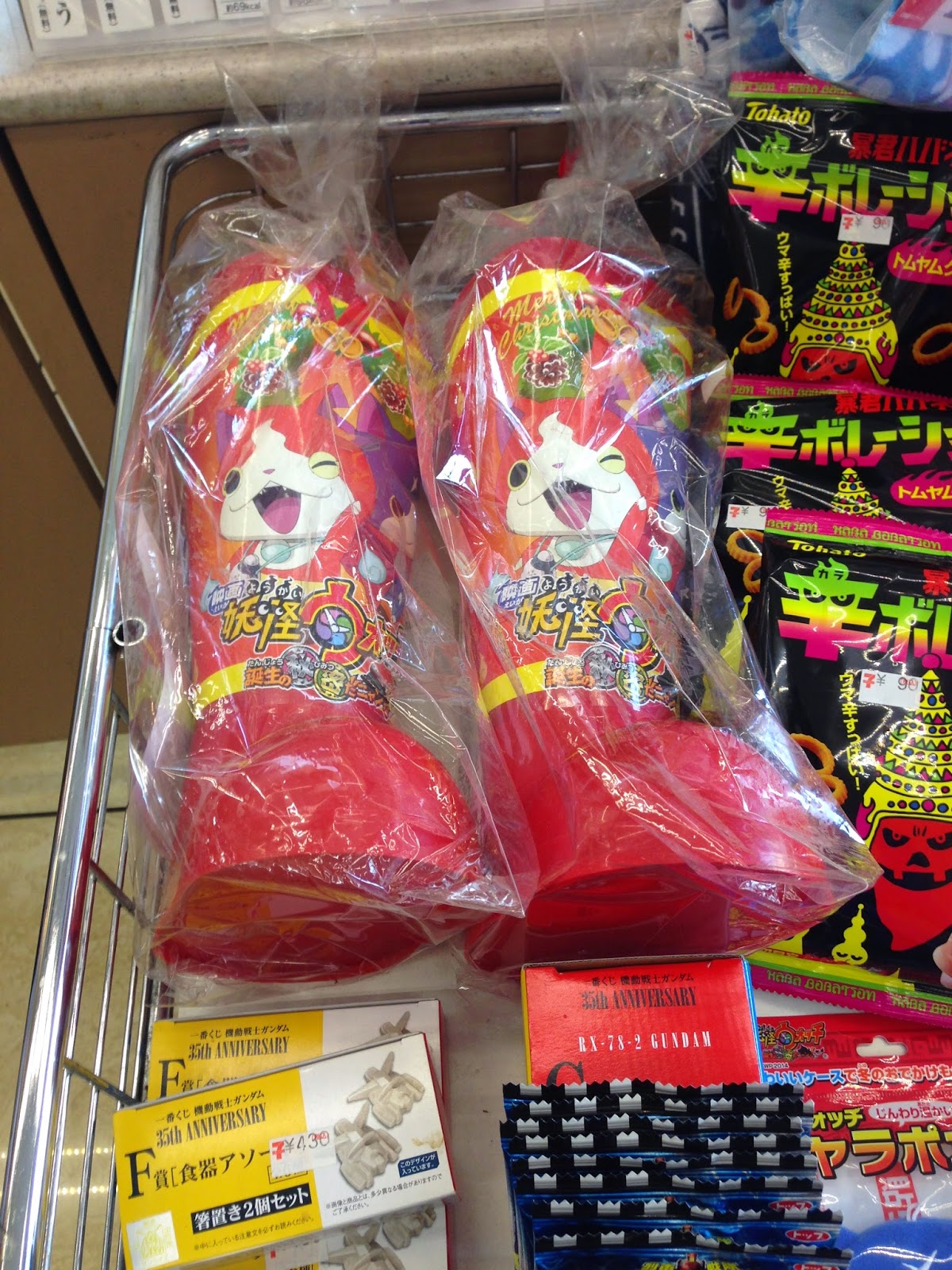 I think these are gum boots? Let's be honest, these are kinda cool. 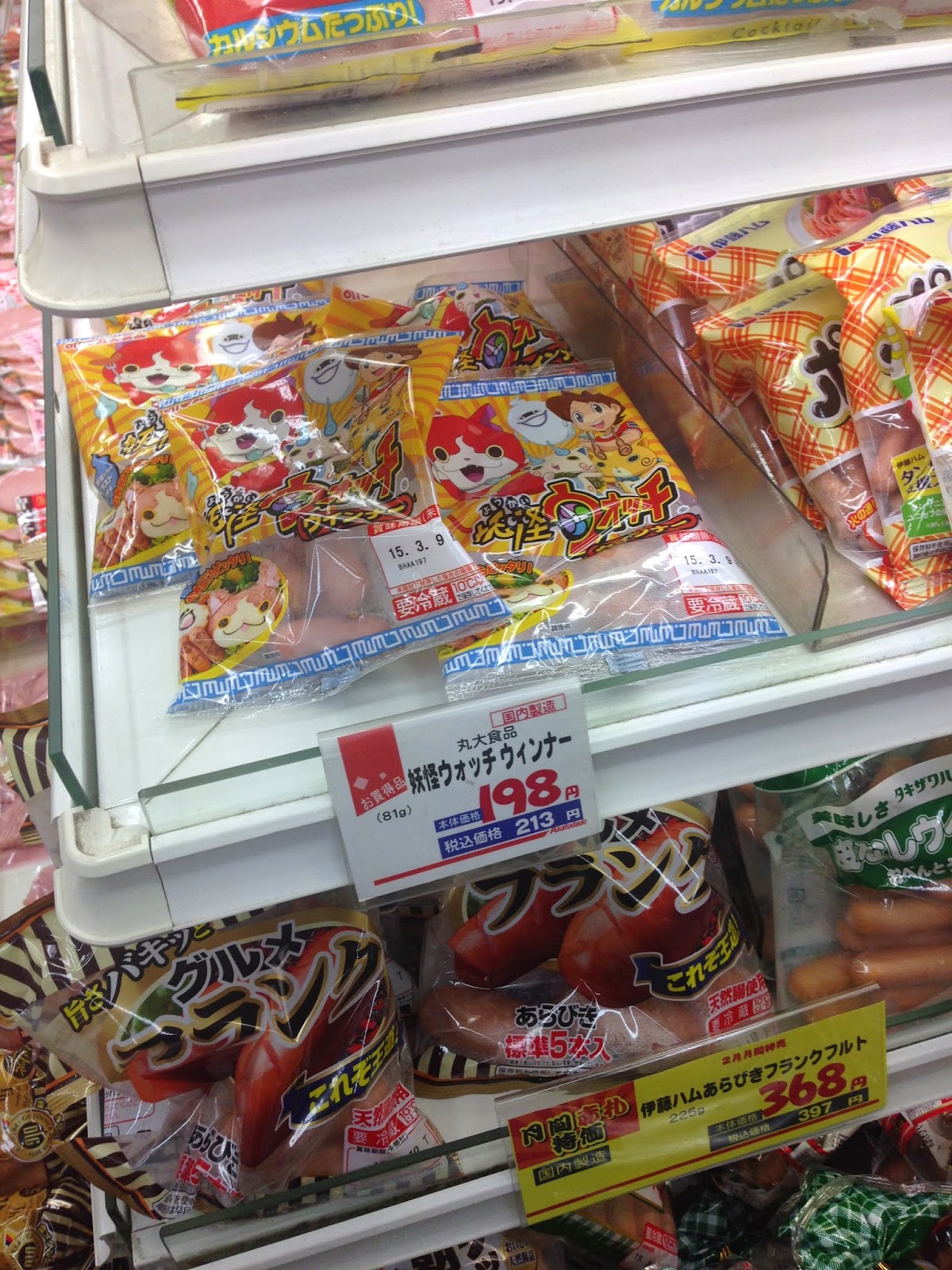 If you look closely, these are actually some Yokai Watch sausage!
(insert ghost sausage joke here) Stickers, tissues and lots of Yokai Watch at this Family Mart! 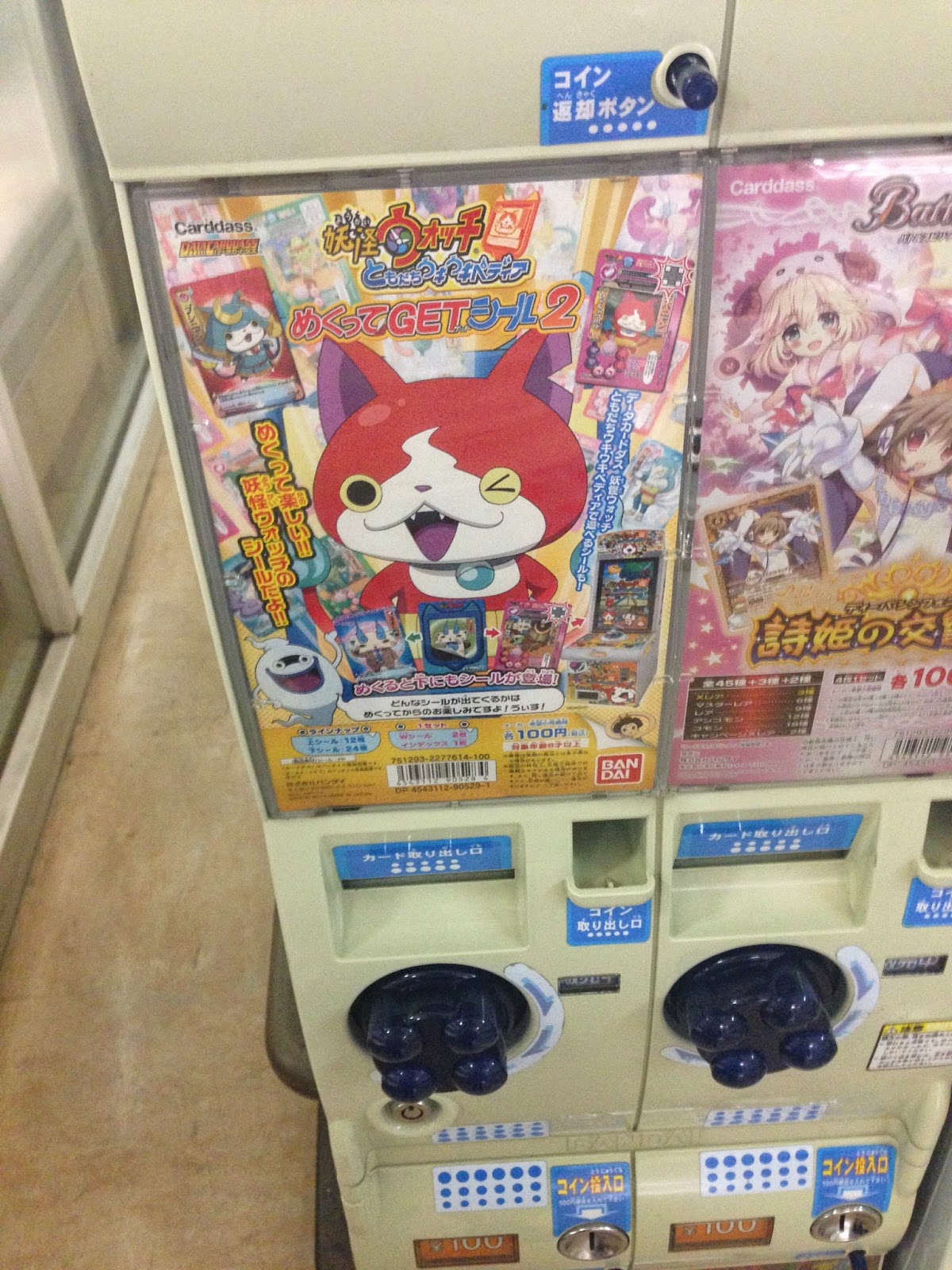 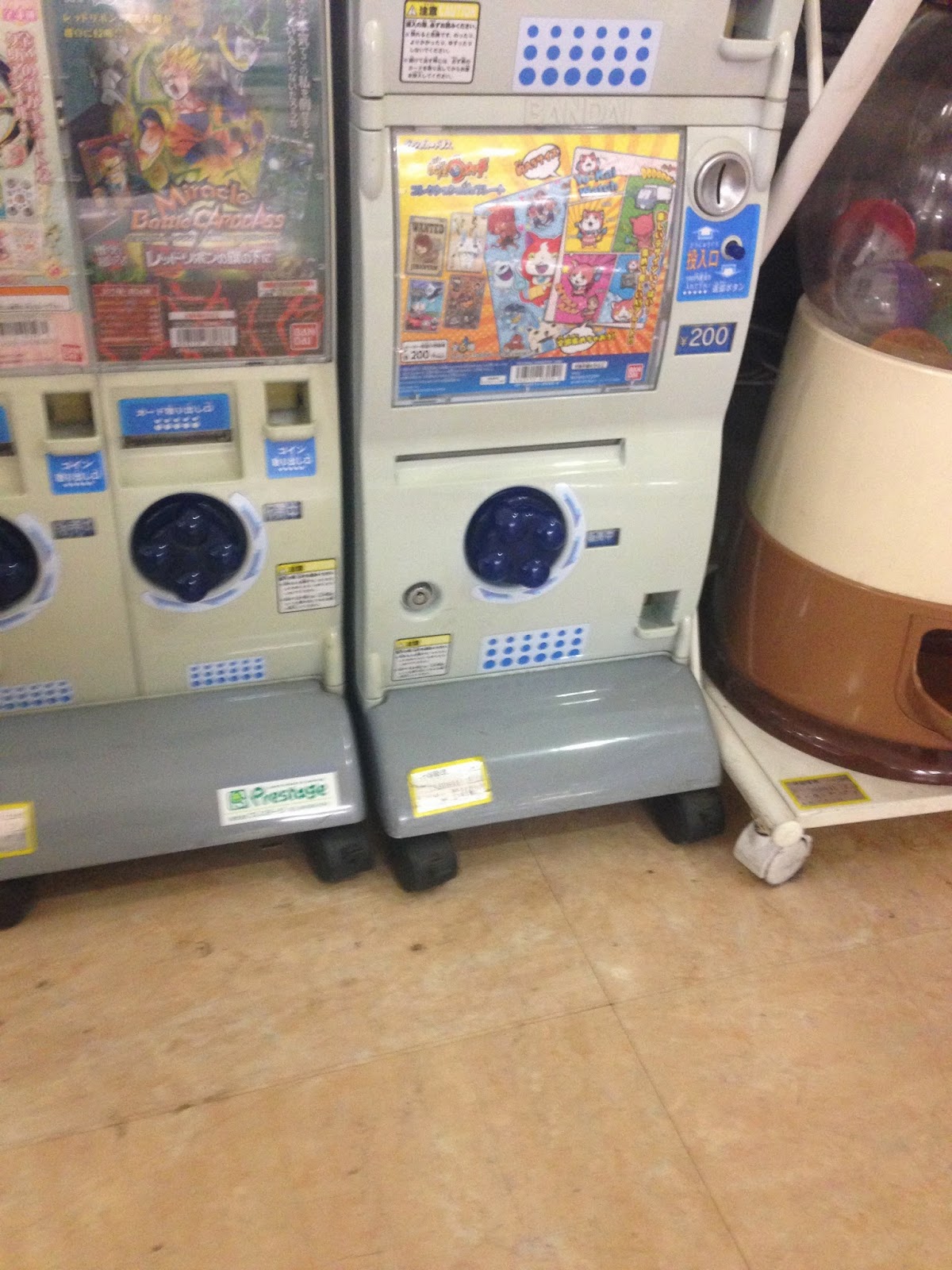 ....With this on the other end of the aisle! 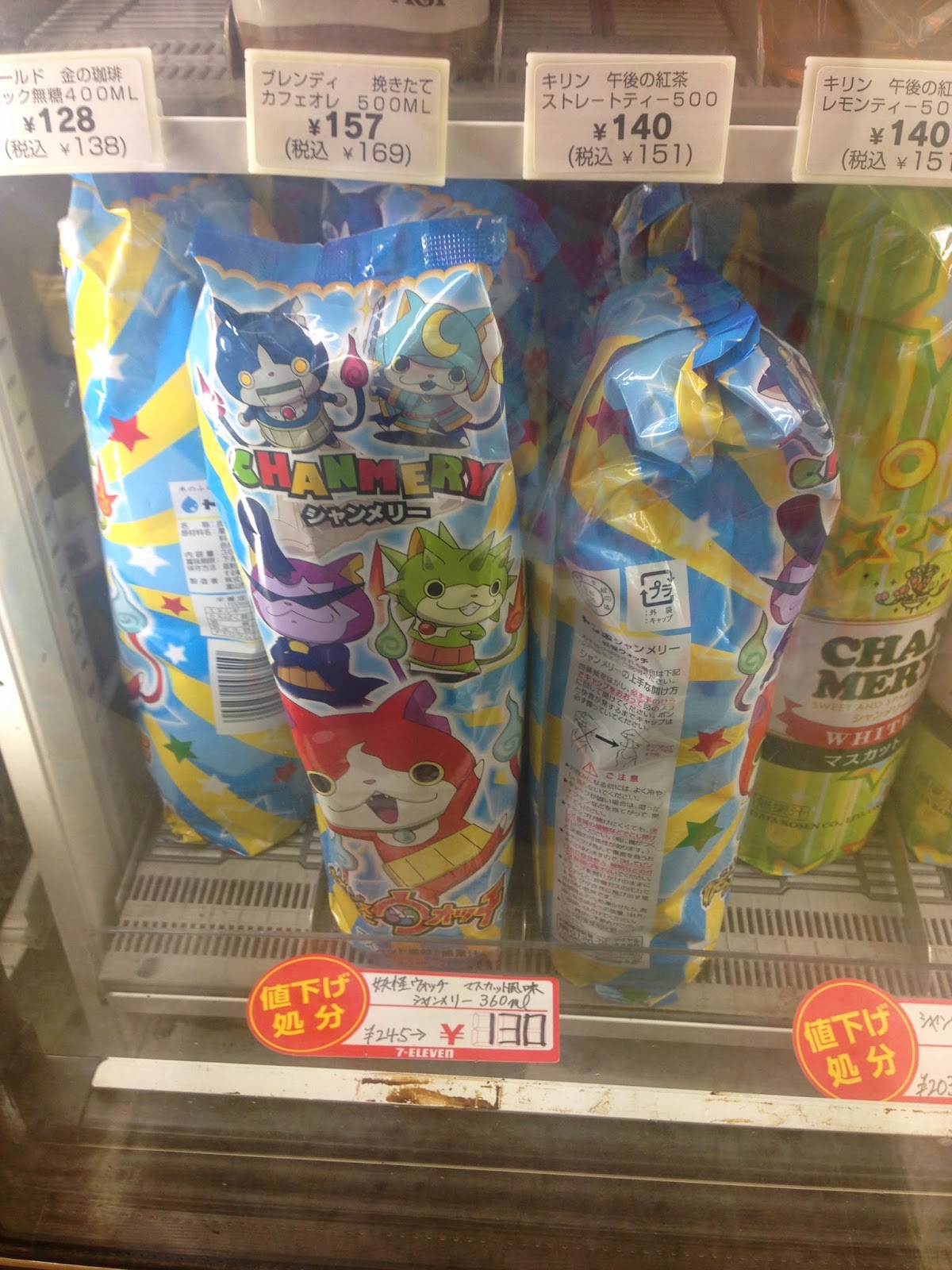 I truly can't remember what this is or where I saw it (probably a grocery store). But it's a drink or an ice block or something! 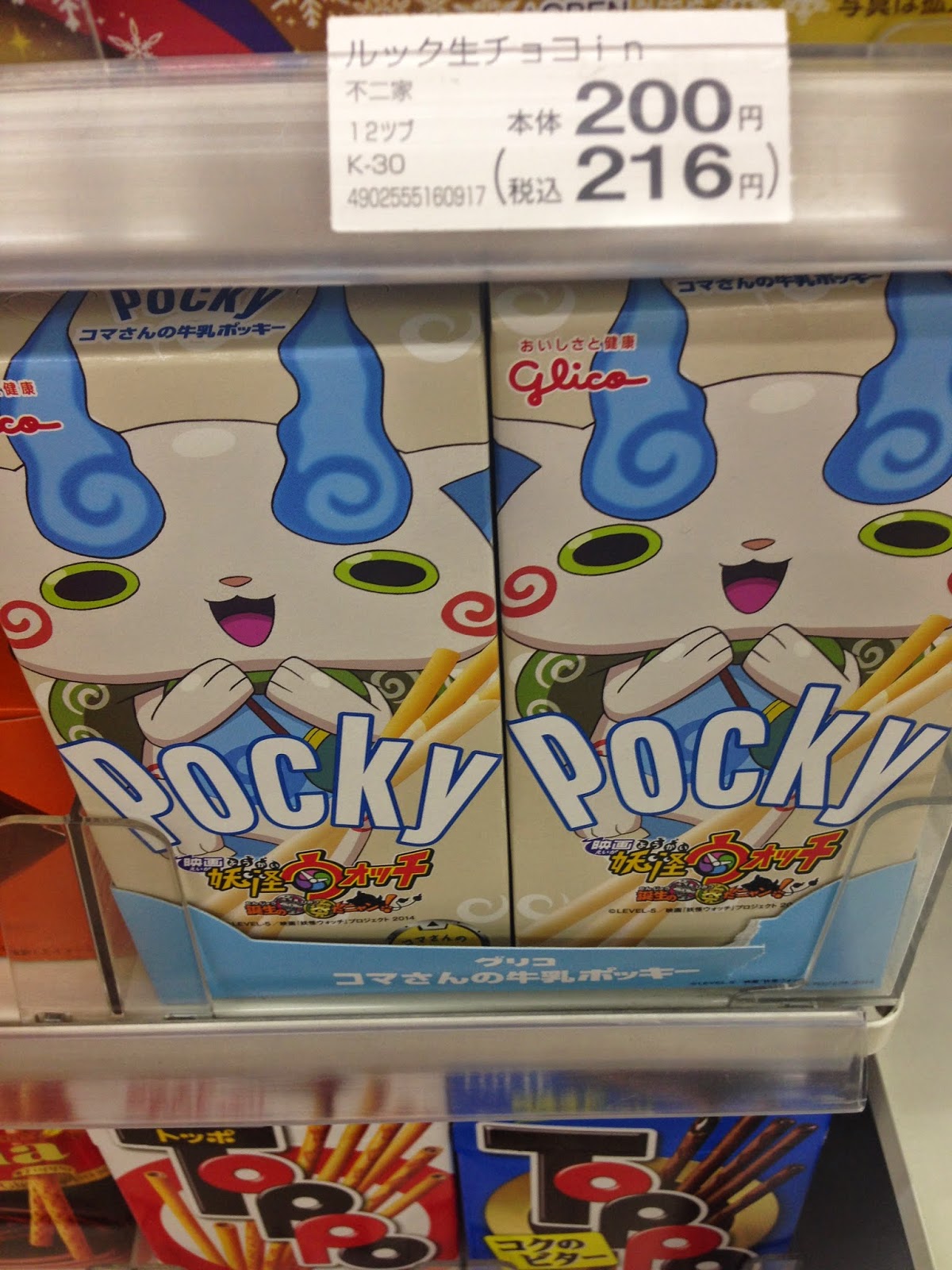 Oh, of course - Yokai Watch Pocky! I actually want to try this - does anyone know what flavour this is? 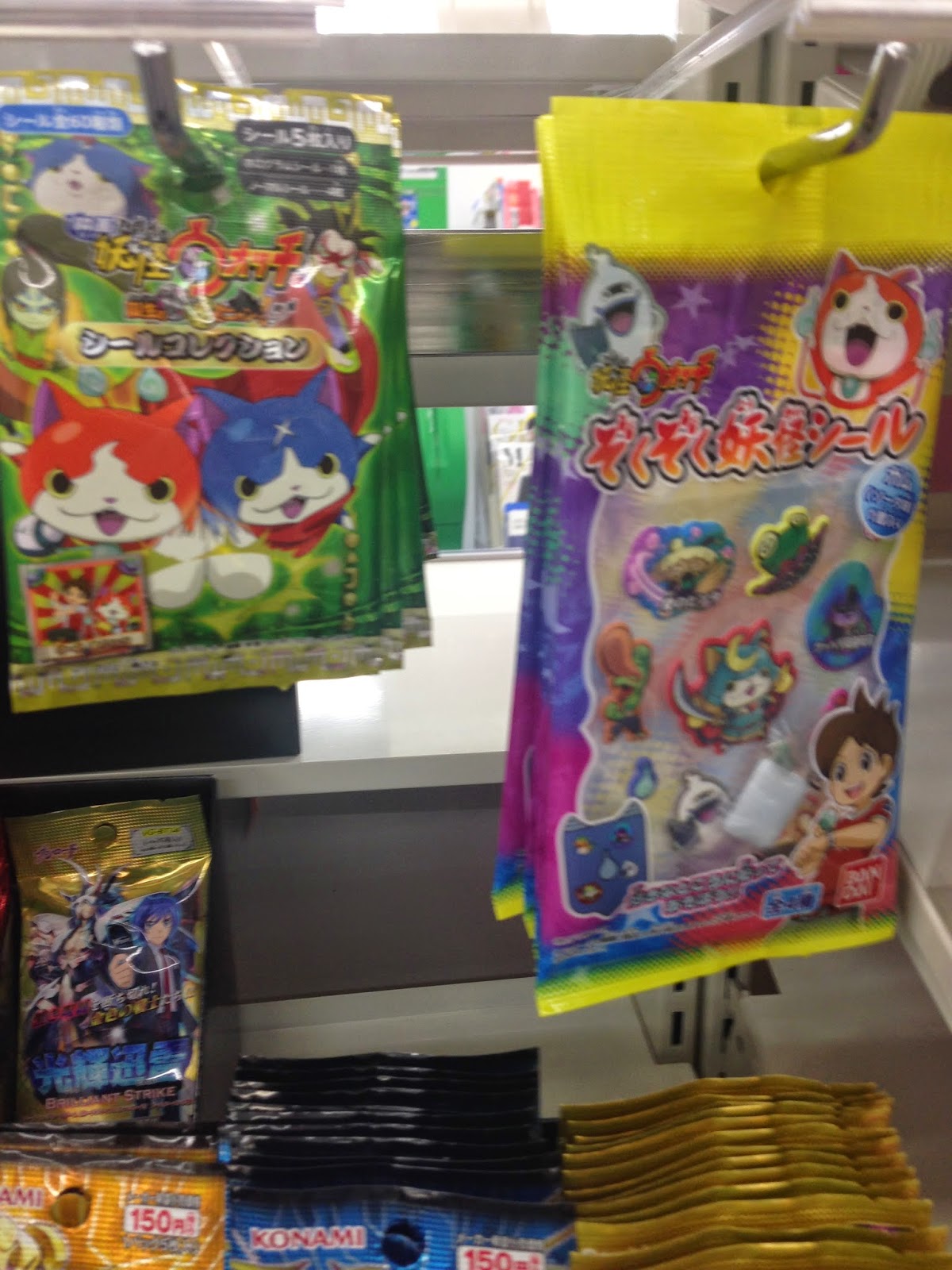 I think it's amazing how much a game has taken over so many different varieties of products! I can't even think of what it must be like to be a Japanese parent with a Yokai Watch loving child. My wallet bleeds for you.

Luckily, the Yokai Watch monsters are kinda cute and I don't have a child, so I don't mind seeing it everywhere. Thank goodness this isn't Persona or something though, as I would be broke.

Have you played Yokai Watch? What JRPG would you plaster all over Japanese toilet paper?
I love hearing your thoughts, so please comment below or send a tweet to @JRPGJungle and follow if you want to keep up with these articles. Thanks for stopping by!
Posted by JRPG Jungle at 21:00