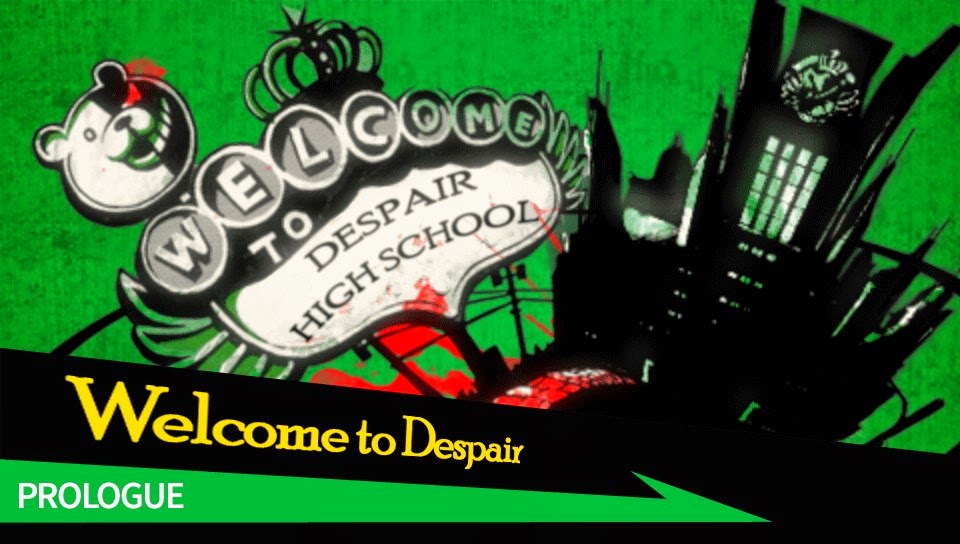 There aren't many games that render me unable to be a normal functioning human being, but I'm strangely proud to say that Danganronpa is one of them. Trigger Happy Havoc: Danganronpa's positively gripping plot and immersive world took me by surprise and gripped me with it's thilling story and fun puzzle-like gameplay. If your PS Vita has been lacking a worthwhile visual novel with unique gameplay and a thrilling mystery, look no further than Spike Chunsoft's masterpiece, Trigger Happy Havoc: Danganronpa. 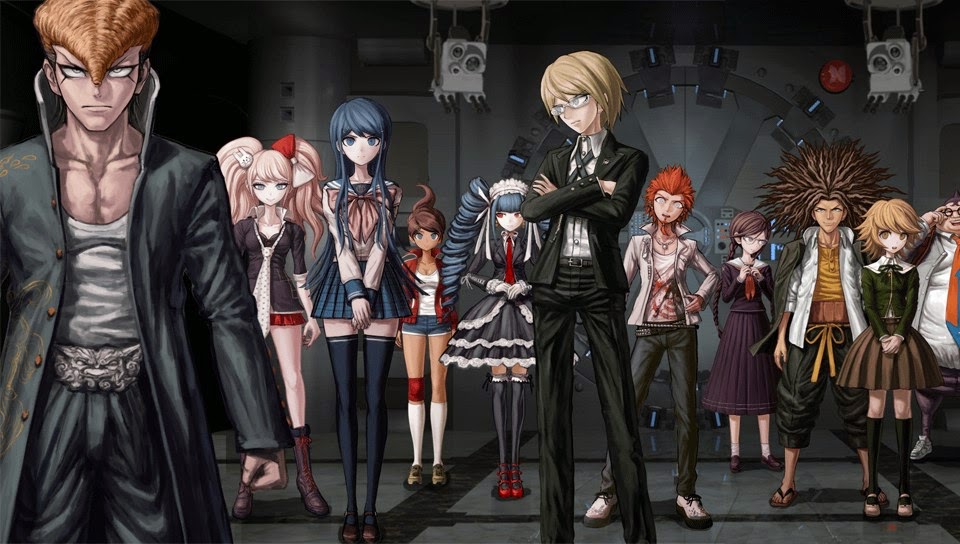 The world of Danganronpa is based at the prestigious Hope's Peak Acadmey, where ultimate students of their fields (brilliant examples include Ultimate Fashionista, Ultimate Fanfic Writer and Ultimate Gang Leader) are scouted to attend this elite high school that boasts guaranteed success later in life. This sounds all well and good, until protagonist Makoto and the other students find that everything isn't what it seems and are now trapped inside the school. The only way out? Killing a classmate and not getting caught will allow a student to 'graduate', but if they're caught they'll face punishment, as in, their own execution. If the wrong student is selected as the main suspect of the murder, the rest of the class is subject punishment while the killer is set free. It's a pretty dark story, but the students are next required to kill anyone – they have the option to live a communal life together. In turn, this plot characters many morality and though-provoking questions for the player and the game is filled with a wonderful cast of amusing and zany characters to lighten up the game and solve the mystery with.

The show shopper for the game is Danganronpa's immersive story and atmosphere. Like a good book that sucks you in, Danganronpa has that effect with it's constantly moving plot full of incredibly interesting characters and surprises. The plot is constantly moving until the very end, decorated with wicked twists and turns that kept me guessing throughout the 25+ hours of story. What I was happy to see is that in the games six main chapters, there was only one where I was 100% sure who the killer was - each mystery is heavily veiled, requiring careful examination of all possible evidence to get the right clues to find the blackened student.


Thanks to music, voice acting and quirky graphics, the game's atmosphere does a lot to keep it's mood and essentially never break character. The game's graphics are rendered in a 2.5D art style, with 2D characters placed on a 3D background. Cutscenes also look unique, combining anime art and sketch artwork to create a visual style that is distinctly it's own. One of my favourite parts of the game's graphics that if a part of the game really doesn't need crazy artwork, it instead uses a retro feel, with pixel art and sprites used on things like the map or each character's door signs. The music and visuals all have a distinct feel that fits perfectly - things like having gruesome murder scene but hot pink blood and dark looking school corridors lit by a neon light create a disturbingly dark but light-hearted feel that fits the game perfectly. Partnered with incredible voice performances whether you choose the English or Japanese voice track, the game is well-polished and stylish all at once. 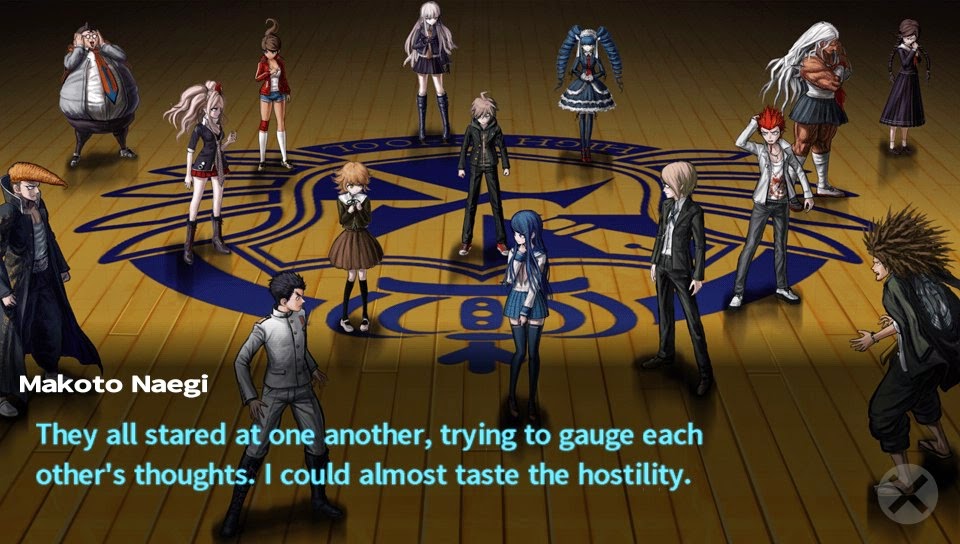 Taking advantage of the visual novel format, Danganronpa's detail heavy and absorbing story is delivered in the best way possible between it's text and gameplay functions. While the game is text heavy, the way Danganronpa adds gameplay to the visual novel format is smart and fits the 'who-dun-it' vibe by using puzzle-like elements. In each chapter, the first half goes through Daily Life, where you're taken through the chapter's main story and get the chance to get to know the cast through the mini-social sim Free Time section. Once a murder occurs, the chapter switches to Deadly Life. You're given Investigation Time where you find the Truth Bullets you need for the Class Trial in the form of evidence from the scene of the crime. During Class Trial time, you literally shoot down weak ideas spoken by the class members, using the Truth Bullets you found earlier to counter against contradictions. 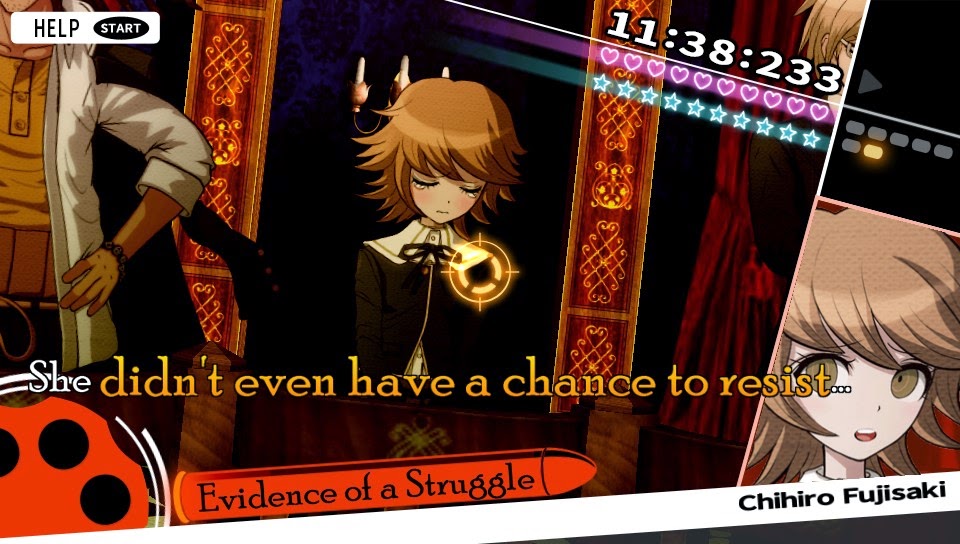 I was impressed at how the Class Trial takes full advantage of the PS Vita's hardware, incorporating the back-touch pad, front touch-pad, triggers and other buttons all in this one section of gameplay, which isn't something I've seen in a Visual Novel style game. Class Trial throws in timed mini-games such as Hangman's Gambit (a mini-hangman-esque game) and Bullet Time Ballet (to my delight, a mini-rhythm game for when someone is mouthing off suspiciously) to keep things interesting and finishes off with a puzzle game where you put together a chronological comic of all the events that have been proven as fact in the class trial. The whole experience, along with the story each murder and the school's own mystery unfolding really kept me on my toes and I found myself becoming as shocked as the other character when a surprising fact was unveiled. 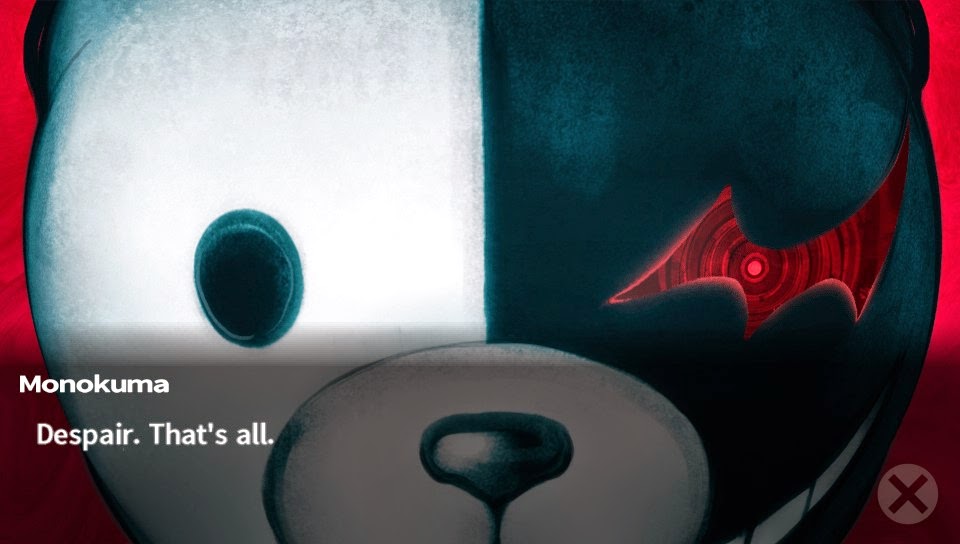 If you like Visual Novels, are looking for an introduction or a game to lose yourself in, let me suggest one of my new favourites, Trigger Happy Havoc: Danganronpa. The plot left me entangled in it's depths for nearly 25+ hours and I was at the edge of my seat the entire time. Partnered with varying gameplay elements and styles to keep things interesting, it cannot be missed by fans of Visual Novels and rich stories for on the go. At this point in time, I call it the best visual novel game I've ever played and one of PS Vita's finest.


What did you think of Danganronpa? And what's your general opinion on monochromatic, deranged bears?
I love hearing your thoughts, so please comment below or send a tweet to @JRPGJungle and follow if you want to keep up the content we post. Thanks for stopping by!

Note: This article does contain an affiliate link. You can read our Affiliate Link Policy here.
Posted by JRPG Jungle at 19:00