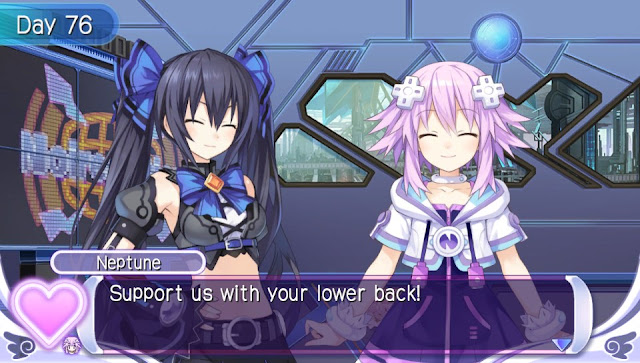 Hyperdimension Neptunia is always ready to make it's players laugh. It never takes itself too seriously as it parodies the real world video game industry, replacing the big name corporations with beautiful female heroines called CPUs. My first dive into the series was with this Idol spin-off game, Hyperdimension Neptunia: Producing Perfection. While Producing Perfection is very different from the JRPG gameplay of the main series, the Idol simulation game is full of funny dialogue and it's simple but fun gameplay and light-hearted story provides the perfect amusement level and length for a light game, being able to be completed in just a few hours. It's a great introduction to the series, especially for players like myself who are new to the series. With plenty of comedic moments, the girls of Hyperdimension Neptunia entertain both with their songs and their humour in this fun-filled Idol story. 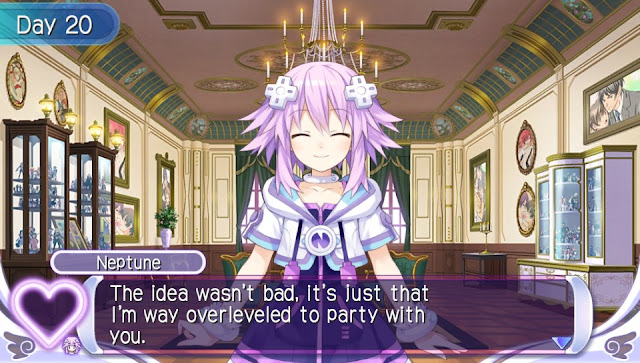 The standard Hyperdimension Neptunia games are a parody of the video game world that usually involves JRPG mechanics and the girls fighting for their shares (as in stocks) in a 'console war'. The girls, known as CPUs, along with the areas they rule each represent a console. For example CPU Noire rules Lastation and Vert rules Leanbox, both which have names that match very closely to two real life game consoles. In Producing Perfection however, the story premise is twisted to include Idol culture. Set in Hyperdimension Neptunia's appropriately named world called Gameindustri, the four girls unexpectedly lose all of their hard-earned shares thanks to an Idol boom, which means they will lose their power. In order to keep their powers and their areas alive, they decide to combat this by becoming Idols themeselves. They will be helped by you, their Producer, who has been transported to the world of Gameindustri because of your Idol game prowess. 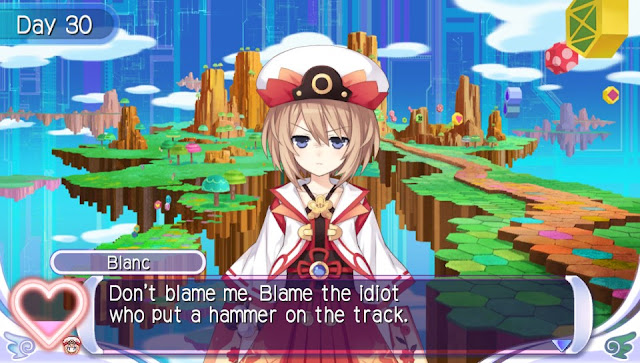 As an amateur producer, you have the opportunity to work with a single heroine on this journey, with each girl's personality offering different personality quirks to your journey to Idol share domination (or something like that). Neptune is very fun and happy, Noire is the sassy tsundere type, Blanc is somewhat balanced mix of extremely calm and violent and Vert is the most mature of the bunch and an avid gamer, who openly boasts to have the biggest breasts in Gameindustri. While all the girls are different, each story takes advantage of their more amusing, flirty and funnier sides to ensure that no matter which girl you pick, you will have fun. I played all the routes last year and in my recent replay I came back to Neptune, as her fun energy is infectious throughout the silly story. 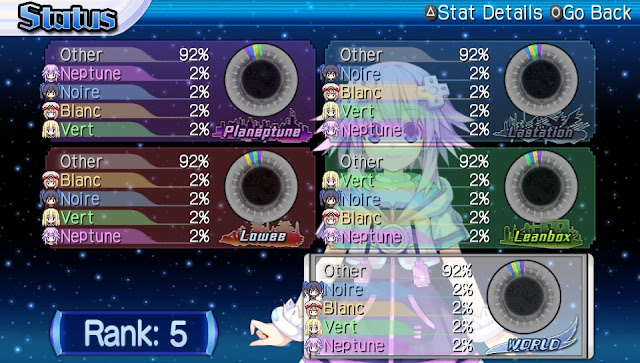 Each in-game day lets you choose a different Idol or CPU related task. There's options to train to improve stats, have a publicity event to increase fans, spend time relaxing to decrease stress, move your Idol operation to another area or put on a concert (the biggest stat increaser). For the most part, you are completely free to choose whatever you want to do, as long as your Idol isn't stressed (if she's 100% stressed, it's game over). Balancing your Idol and Fan level is the main name of the game, but doing different tasks offer different cutscenes to help you get to know your Idol, so each option is kept interesting and entertaining. There isn't a lot of skill needed in every aspect of Producing Perfection, but I didn't mind as I was busy watching my character's funny antics and gaining fans to progress the story at a nice pace. Because the days are so fast, it's easy to advance multiple days in a manner of minutes. I liked the fast pace, especially since the game's subject manner is light. It stops Producing Perfecrion from becoming repetitive, which is probably best . 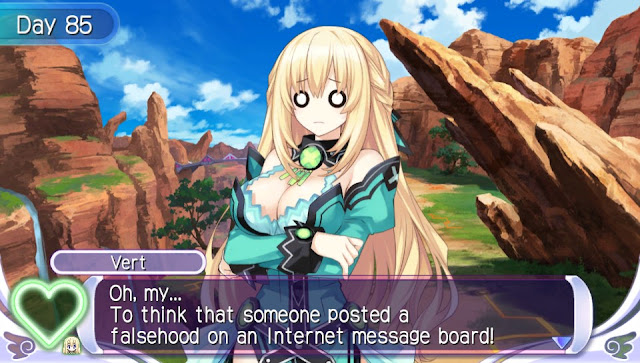 Lingering throughout the game is the time limit that the girls must complete their Idol quest in. If they don't complete this task within 180 days, they will lose all of their shares to MOB48 (a clear parody name of Japan's massive AKB48 girl group) and consequently their power. Once I spent maybe 10-20 in game days learning what would increase my Idol's stats and fans the fastest, this time limit was never an issue. Days pass by quickly and the game is achievable with 50-100 in-game days, depending on your luck or skill. The first time I played the game two years ago, I completed it in about 90-something days. In my most recent playthrough, it took a mere 51 days and about 4-5 real life hours.

The length of the game is either Producing Perfection's biggest fault or biggest success. You won't find a long term idol-simulation in this game, unless you're a completionist or enough of a fan of the Hyperdimension Neptunia series to unlock all events with all girls. If you're looking for a long game, this isn't it. For myself, Producing Perfection was an appropriate length, as there's not enough serious plot or twists to keep this game amusing for more than a few hours. However more replayablity can be found through playing as each of the girls or unlocking extra events. Because of Producing Perfection's short length, I really like that it allows you to play at a pace and seriousness level of whatever you're feeling like at the time. 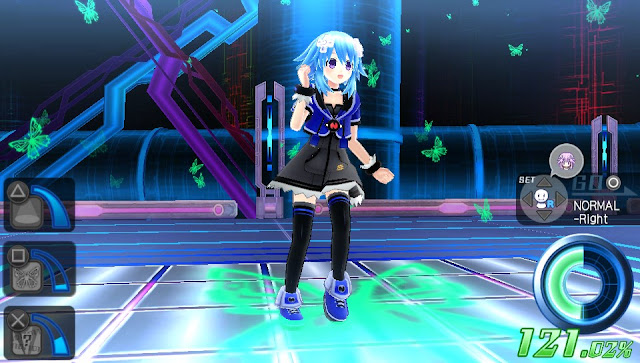 Because of Producing Perfection's fast nature, most time is spent fleshing out the story. However there are some faults to be found in Concert Mode's gameplay. Concert mode is where Producing Perfection is the closest it gets to being an Idol game - you put on a stage show and it's time to try and win over the crowd. Choosing a costume and stage setting's for my Idol CPU girl was certainly fun, but the lack of song selection can make Concert mode feel repetitive, especially with only cute dancing (albeit very cute indeed) to hide behind since there's no dialogue. Once the Concert has begun, you have to win over the crowd, using stage effects and camera angles or even getting your CPU to use her more mature (both in personality and also visuals, with a noticeable chest enlargement for almost all character's forms) HDD power-up form. HDD mode almost always guarantees a successful show, stage mechanics can be fun to add, but there seemed to be no system to using the camera properly - it almost seemed like if I just moved it around and switched angles enough, my score would increase. I didn't personally mind the lack of overall challenge in Producing Perfection as I was just enjoying getting to know the CPU's, however for fans of Idol games or the JRPG version of Hyperdimension Neptunia, I can see it being potential bothersome to some players. 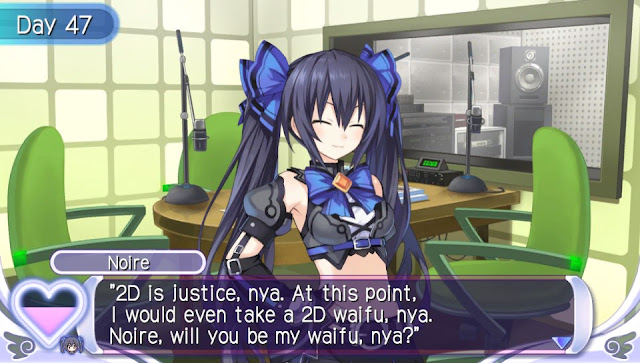 Hyperdimension Neptunia: Producing Perfection opens with a message encouraging people to basically 'relax and don't take it too seriously' and it sums up the game well. It's a humourous light Idol simulation game, with the spotlight mostly shining on it's fun dialogues and characters. Although it's day-to-day game life  is fun, it's idol components aren't the most challenging. If you're looking for deeper gameplay, I'd encourage you to look elsewhere (such as the main Hyperdimension Neptunia series), but if you're looking for a fun-filled, quick adventure living in a interesting universe mixed with a little music, Producing Perfection is good fun to fill a weekend or a day or so.

Score: 7.4/10
Not the most challenging game in the universe, but it's full of good quick Idol and Hyperdimension Neptunia fun for on the go or a relaxing afternoon full of cute and amusing characters.

You can pick up Hyperdimension Neptunia: Producing Perfection for PS Vita from Play-Asia.com now!

Whose route are you the most interested in - Neptune's, Vert's, Blanc's or Noire's? What did you think of Producing Perfection?
Leave a comment below or send @JRPGJungle a tweet and let's talk!

Note: This article does contain affiliate links to Play-Asia to help support this site. You can read our Affiliate Link Policy here. Photos in this post are also from Play-Asia.
Posted by JRPG Jungle at 02:00