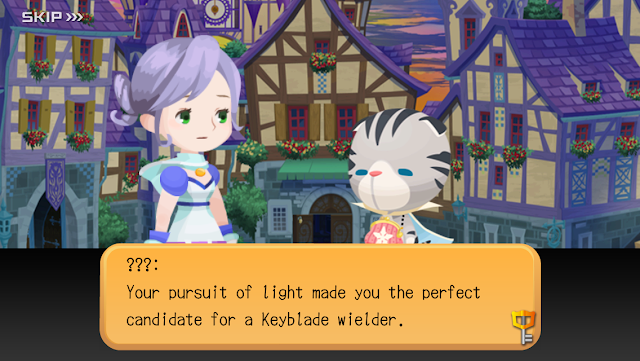 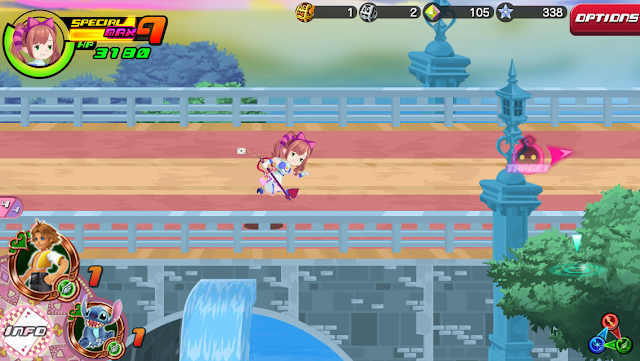 Kingdom Hearts Unchained χ’s story and gameplay is divided into small bite size quests that take on average less than 5 minutes to complete each, which is fantastic for those like myself playing on-the-go. If you’re interested in Unchained χ for the story, it currently boasts 200+ levels with more to come, so there's a lot to keep players busy. What may not satisfy all players is the pacing of Unchained χ’s story. The first hundred levels are mostly Disney and Gummi Ship filler, presumably in part to teach the gameplay mechanics, but still much slower than it should be. I'm just past level 100 and the original story portion of Unchained χ is only just beginning, which was a big surprise to me because there was so much filler I thought there may not be an actual story. On one hand, I liked the short length of the levels and the amount of them available as it felt like I was making a lot of progress. On the other hand, seeing myself progress so far without any significant plot felt a little discouraging, especially as a big fan of Kingdom Hearts' story. A recent update added in some story missions that are meant to be some of the ones featured in Kingdom Hearts HD 2.8 in Backcover χ, but these missions will take a really long time to get to for most new players and it’s a lot of time to invest without being pushed to continue by a faster paced plot.

Luckily, the gameplay inspired by the Kingdom Hearts console games in Kingdom Hearts Unchained χ is enjoyable enough for those making their way through the story. The active battle system from the Kingdom Hearts console games is transformed to incorporate the smartphone's touch screen and also changes the system into a turn-based system. Each quest is set in a small, explorable world based on locations from Kingdom Hearts and Disney. It was so good to be able to run around the map to choose enemies and open treasure chests, especially since most smartphone games I've tried (except ports) use simple menus to get to locations and don't have interactive areas. Running around the map is your custom avatar which uses the power of Character Medals and the Keyblades to fight Heartless during various quests, with each quest ending when the target enemy is defeated. Since the gameplay, locations and enemies were similar enough to the characters from the console game, I quickly felt at home in the new system and had fun trying achieve each level's mini-goal to get as many useful items as possible. 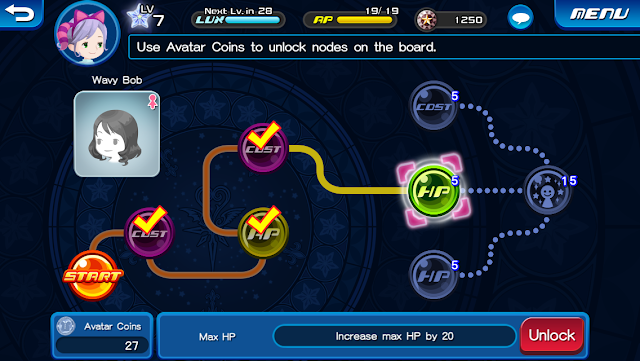 Avatar Boards, Character Medals and Keyblades provide plenty to customise, upgrade and collect in Kingdom Hearts Unchained χ. One of the main collectibles are Character Medals, which are won through levels and events. The medals act kind of like weapons, each boasting their own stats and attack style. This helped me understand how they worked easily, but also meant the stats and attacks were far more important to me than collecting the medals for the characters. These medals are highly upgradable and I definitely enjoyed the upgrade process of combining and leveling up medals more than the collection aspect. The collectible I enjoyed most though are the genius Avatar Boards, which not only allow cool costumes to be earned for your avatar to run around in, but also allow for stat increases all in the one system. All of the Avatar Boards are like mini skill trees completed by unlocking useful game items with Avatar Points earned from levels. The combination of stats and silly costumes on these boards felt way more rewarding than just decorating a character and I always felt like I was getting a bonus reward for my quest accomplishments. 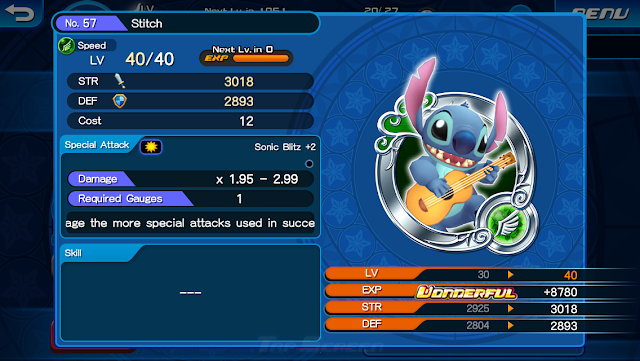 Kingdom Hearts Unchained χ has a good amount of events and special quests and when combined with the amount of story quests available, the amount of content to play with almost feels endless. Just at the time of writing, there are three different events available to play, a daily reward offer and special between Quest Raids (which are small boss battles between quests) for Avatar Board parts. Most of my experience with Unchained χ was story-based because at the moment some of those extra quests are quite high level, however the events I played provided much needed materials for upgrades that the story didn't.

An important thing to commend the game on is it's willingness to give out items and currency regularly and the cheapness of using AP. Jewels are Unchained χ's currency and can be purchased with real cash but are regularly given out from logging in and completing quests. AP are the credits used to play each level and can be restored with Jewels, by leveling or by waiting 3 minutes per AP. The cost to play each level is fairly low and I never found myself stopping and starting sessions with the game since my AP would usually get restored by leveling up which made each gameplay session feel much more meaningful. Players who purchase Jewels will never have to worry about getting low on AP or Avatar Boards, but players like myself who are looking for a cheaper or free game experience can have an extremely generous amount of fun in this free-to-download game. 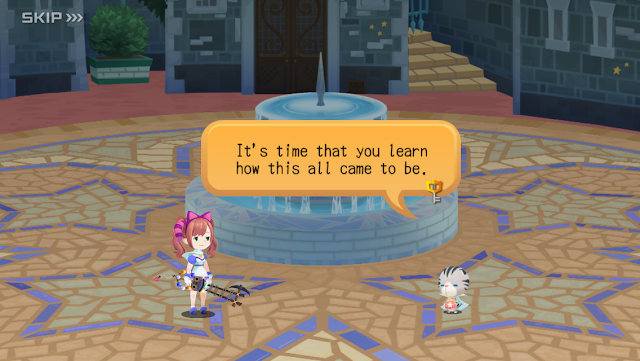 Kingdom Hearts Unchained χ is another triumph in Square Enix’s smartphone game journey. It makes use of the smartphones touchscreen well to create a turn-based, yet familiar version of Kingdom Hearts and has so much content that it may take me until Kingdom Hearts 3 is out to play it all. Getting to the important part of the main story takes a bit too much time, but if you're like me and you're enjoying the experience, it's only a small issue for an enjoyable game. For fans on the go who want a more JRPG-like experience, Kingdom Hearts Unchained χ is definitely a good start for those looking for deeper smartphone JRPGs.


Score: 8.5/10
While the plot takes a bit too much time to get going, the fun gameplay and collectibles are done well enough to keep me coming back for me. Now to complete another 100 quests!

What did you think of Kingdom Hearts Unchained χ? What are your favourite smartphone JRPGs?
Leave a comment below, send me a tweet at @JRPGJungle, hit me up on the JRPG Jungle Facebook page and let's talk!

Note: Smartphone games are regularly updated and changed. My opinions about this game are based on the condition of the game at the time this review was released and may not cover any future important changes to the app.
Posted by JRPG Jungle at 03:00