Persona 3 left me with two things: dungeon fatigue and a love of the coolest humanoid robot ever, Aigis. While I think I'm finally getting over the dungeon fatigue, there’s no denying that Aigis is great and interesting character. Even pre-playing the Aigis-central second part of Persona 3 The Answer, her story was one of the highlights of Persona 3, especially during the social parts of the game as she was so different to the other characters in the way she responded to the world and events around her. My first true encounter with Aigis wasn’t Persona 3, rather Persona 4 Arena where she immediately struck my curiosity because she was a robot dressed as a human, and her charming interactions with the other characters really made her stand out against Persona’s already distinct and unique cast.

To commemorate mine and my boyfriend’s love of Aigis, we convinced each other it was about time to pick up an Aigis figure for the apartment. A year ago, I saw a huge Aigis figure in Akihabara in a rotating display that I really liked, but it was about $200 and was way too big to justify storing it anywhere in our small apartment and the slowly disappearing remaining space in my figure collection wouldn't allow it either. So instead of that figure, I found an Aigis (or Aegis as she's known in Japan) Persona 4 Arena prize figure from Taito that had a gravity defying pose and big weapons that seemed pretty cool for a low price of about $20. 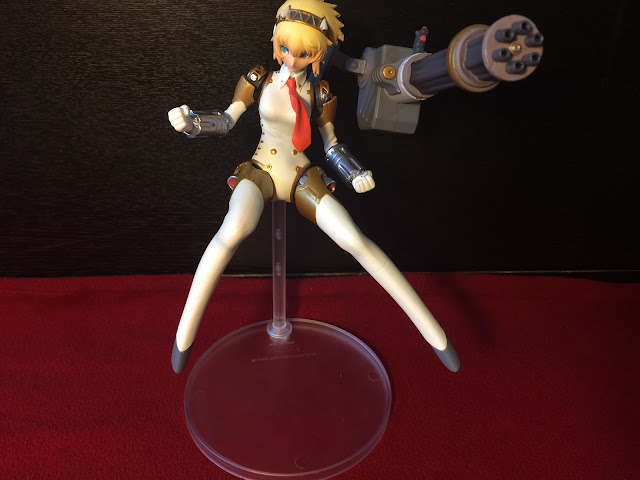 Considering prize figures are typically not the highest quality, this Aigis figure is pretty decent. When I took her out of the box, I immediately noticed the beautiful detail of her face. If you look at her eyes, the drawing style is so spot on to Atlus’ animated version of Aigis that it almost makes the figure look more expensive. Her textured hair has a slight ombre colour effect, I’m guessing to add texture and simulate light being cast on her as it’s not something I really noticed about her in Persona 3 or Persona 4 Arena. I like the hair a lot, although there are a few very small bumps that up-close make the Aigis figure look a tad dirty sometimes, but from far back it's not a problem. 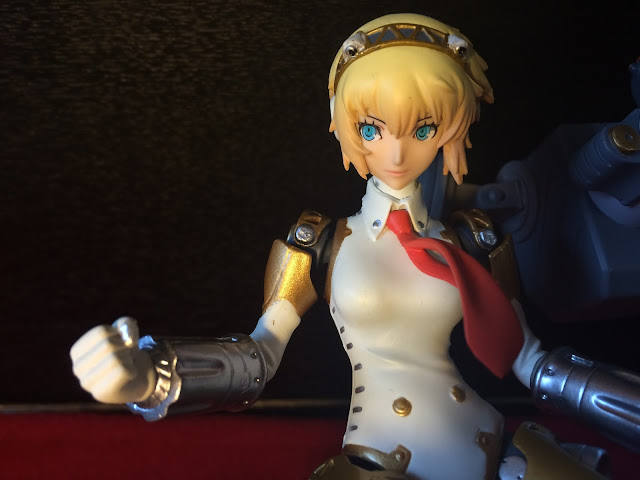 The rest of the figure is perfectly coloured with a mix of matte and metallic paints and is pretty detailed considering the price. While the gold, patterned detail on Aigis’ shoulder and leg connections have a few small bumps and tiny out-of-place paint marks, they're mostly smooth and detailed enough that from further back she looks just as detailed as other my other figures. A lot of these less perfectly-detailed spots are also easy to miss thanks to her cool looking weapon and dynamic pose drawing attention to other areas of the figure, so it's not a big issue for me. It may not be the most precisely detailed figure, but every detail is represented and done well enough.

The PVC body of the figure feels as strong as most of my other figures and is supported by a plastic rod attached to a plastic base. These can hold Aigis well on a shelf, but I’d probably advise against keeping this figure on a desk or area where she can be bumped as the part attached to the base that holds Aigis has a tendency to move very easily when touched. Even when I was taking pictures for this post, I bumped the base a little too much and suddenly had an upside-down Aigis figure. While it definitely looked amusing, it’s probably not the way most people want to display their figure. When kept in a steady area, I haven't had any problems or fears of damage and as long as it's not touched regularly, so my figure maintains it's structure and appearance just fine. 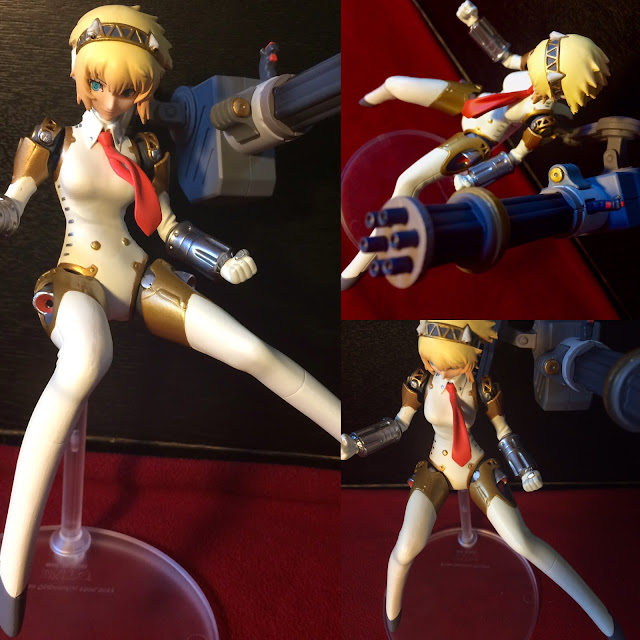 For the low price, this Aigis figure is very cool looking with it’s strong, dynamic pose. Although it’s not the most detailed and perfect Aigis figure ever, the colouring and face details are nicely done and when displayed on a shelf, she looks great and doesn't have any problems. I would eventually like to get the big high quality Aigis figure someday, but for now, this Aigis figure is a nice and cool-looking way to remember my Persona 3 experience without breaking the bank.


Score: 7.5
With amazing face details and a cool pose, this Aigis figure is a great find for the price.
Now I need to get her a Koromaru!

Who was your character from Persona 3? Do you have any Persona figures?
Leave a comment below, send me a tweet at @JRPGJungle, hit me up on the JRPG Jungle Facebook page and let's talk!