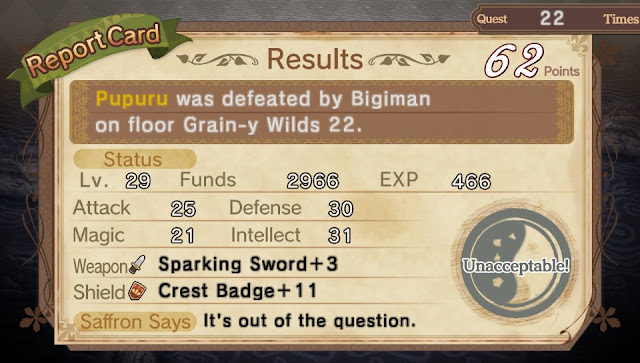 As much as I love video games, I don’t claim to be the best at gaming. While I can pick up most mechanics, my varying degree of skill with some games has made me no stranger to the Game Over screen and I've had to hit the Retry button in some of my most played games (such as my complete inability to complete the Omega Ruins in Final Fantasy X). Recently I’ve been playing the Roguelike JRPG Sorcery Saga: The Curse of the Great Curry God, a fun but tough dungeon crawler that has found me sent back to its town without my items on multiple occasions with a small bit of my dungeon confidence eaten away. This made me think back to some of the many fails I’ve had while playing JRPGs and while these are only a small selection, these are some of the biggest fails I’ve had while playing or more accurately, times I’ve had my ass kicked while playing JRPGs.


Note: I’ve kept spoilers to a minimum by mostly not mentioning boss names and story circumstances, but there are some minor spoilers about significant boss battles in this article. Proceed with caution! 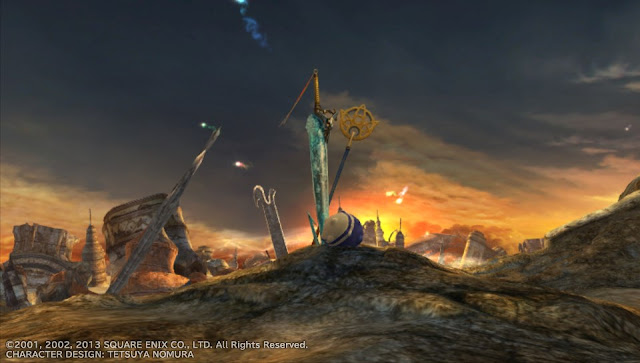 If there’s one thing Final Fantasy is good at, it’s bosses with multiple forms or stages. I’m not referring to the final boss battle that you pretty much automatically win, I’m talking about the true final boss of Final Fantasy X, the one with more than one stage and an overdrive gauge that can quickly wipe out any unprepared party. There are a bunch of bosses like this in Final Fantasy X but when I played the HD Remaster a couple of years ago, I was reminded of that feeling of total horror when you think you've won the boss battle, but oh no, let's put multiple status ailments on all your characters, shatter a couple for good measure and knock some out because I'm definitely out of Phoenix Downs. It was horrible, but the satisfaction I got after grinding a little more, taking advance of any possible status vulnerabilities, winning and crying like a baby to the ending was definitely worth the struggle.


You can pick up Final Fantasy X HD Remaster from Play-Asia.com*! 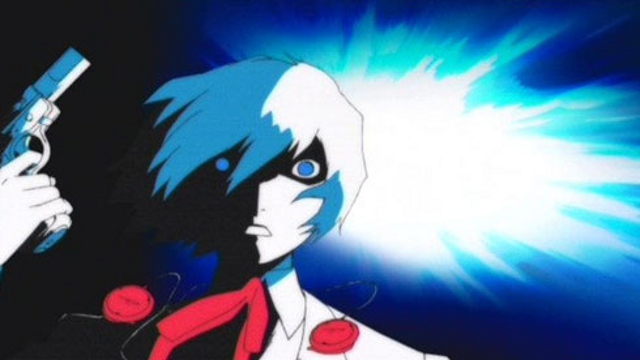 Persona 3’s boss battle is one of the absolute harshest boss battles I have ever experienced. If Final Fantasy X was bad for bosses with multiple forms, Persona 3’s boss is just plain unreasonable. When I played Persona 3 this year, I assumed that it would be harder than the previous bosses I’d faced, all of which had been difficult but not impossible, but the absolute uphill struggle I faced was definitely beyond my expectations. The final boss really ramps up the difficulty, with over 10 different forms to fight and without a proper strategy, any party will be quickly annihilated. I can’t even begin to tell you how many online guides I read and Youtube videos I watched just to check if winning was a possibility and to work out how to defeat that thing with what I had. I must have tried it over 20 times and definitely saw a lot of Game Over screens, which are just a little more crushing when you're almost at the end of the game. It took a lot of persistence and a little grinding, but eventually I did it. I hope to never face a boss that slays me that hard again.


You can pick up the original Persona 3 FES for PS2 from Play-Asia.com* or pick up the PS2 Classic from the Playstation Network Store! 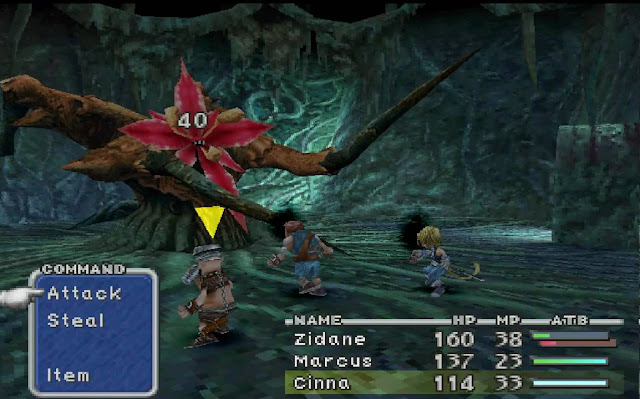 I think I had a lot of luck when I versed Final Fantasy IX’s Plant Brain for the first time, because I had no problem beating it. However something happened - either my Vita ran out of power or I turned it off without saving - and somehow, I lost my save, meaning I had to do the boss battle again. Fine, I said. Piece of cake, right? Wrong.

Older JRPGs are different to the standard beginning of a modern JRPG. They don’t try to make you feel like a god in the first few battles so that you keep playing. They’re not scared to kick you around and knock out a majority of your party, which is exactly what happened to me. I wasn’t expecting to use any healing items because it was one of the first boss fights in the game and I repeatedly kept getting knocked down and finding myself at the Game Over screen thinking I was a better gamer than this. Going from winning on my first try to absolutely struggling was kind of a shock, but I accepted it was going to be a tough battle, put my pride aside and healed my party. It did however let me understand that Final Fantasy IX was going to be a little more challenging than other Final Fantasy’s I played, so it served as a good introduction for what was ahead.


You can pick up the original Final Fantasy IX for PS One from Play-Asia.com* or pick up the PS One Classic from the Playstation Network Store! 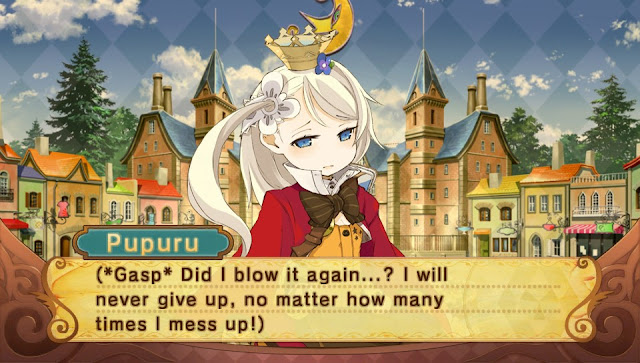 Ah, my week long dilemma. Every dungeon in Sorcery Saga is a little punishing, but with the amount of potential enemies that can surround you, surprisingly strong bosses and devastating traps in the 25 floors of this fourth dungeon, Sorcery Saga is definitely working against me in my quest to win this dungeon. Since Sorcery Saga is a Roguelike JRPG, I’m also starting fresh each dungeon run so if I lose, my next run is even tougher because I may not have my best sword anymore. And even if I go in with the best equipment in the world, there’s potential for it to get cursed or eaten by an enemy or Kuu (your friendly dungeon pet) if he's super hungry. It seems like I need a lucky run and to use Kuu and the area as perfectly as possible. For now, my dungeon crawling confidence is waning, but I will not give up!


(Fun fact: before this article went up, I won the dungeon through excessive grinding on each floor and risking dungeon collapse. Yay! Currently slowly going through the last dungeon so I don't you know...die.)


You can pick up Sorcery Saga: the Curse of the Great Curry God from Play-Asia.com*! 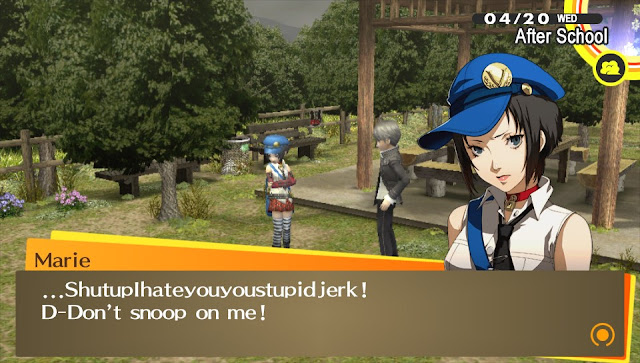 I’ve spoken mostly about getting my ass kicked in battle in this article, but there are plenty of ways JRPGs can make things hard for the player, such as the simultaneously heartwarming and patience-testing Legend of Inaba trophy from Persona 4 Golden. Social Links are an enjoyable part of Persona 4 Golden, but to max them all out in one playthrough requires thorough planning and execution, something I failed at multiple times. This trophy pretty much took me three playthroughs, and with a playthrough of Persona 4 Golden being over 100 hours on average, I don’t need to tell you it was hard work. I had to make sure I said the right things to each character or else I may not be able to fully get them to the next Social Link rank in the next interaction, which would cost more time. Memorising what days characters were available, on top of keeping the dungeon crawling part of the game afloat was a true challenge, but at least it was a fulfilling one as it's probably the most immersed I've felt in a story. Persona 4’s well-written characters thankfully made this worth it and I’m forever happy about the 300+ hours I spent with Persona 4 Golden, even if it was tough.


You can pick up Persona 4 Golden from Play-Asia.com*! 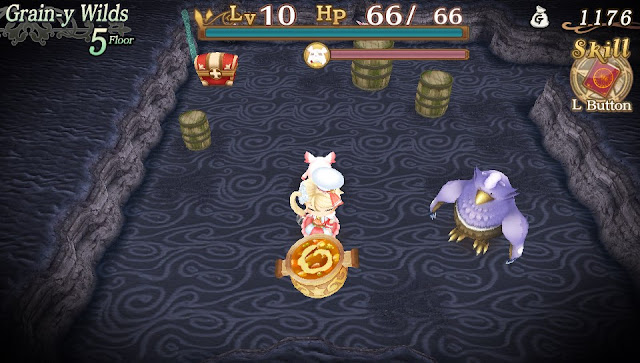 Some JRPGs might be ruthless difficulty-wise, but I never think it’s a bad thing. It’s the persistent battling and desire to beat challenges that make completing a JRPG so rewarding, like I truly worked for the experience I gained. I honestly think sometimes the persistence I’ve had encouraged in JRPGs has also become apart of my everyday life, as I look to be challenged in real life situations and in a weird way I enjoy the struggling challenges presented to me in JRPGs as working them out feels truly satisfying. Knowing that all the challenges in JRPGs are conquerable keeps me going and I’m looking forward to whatever the next JRPG struggle I face is, even if it's a temporary kick to my confidence as a player. In the end, it's worth it.

Any link marked with * is an affiliate link that helps supports the site, so if you use it, thank you!
Posted by JRPG Jungle at 15:00