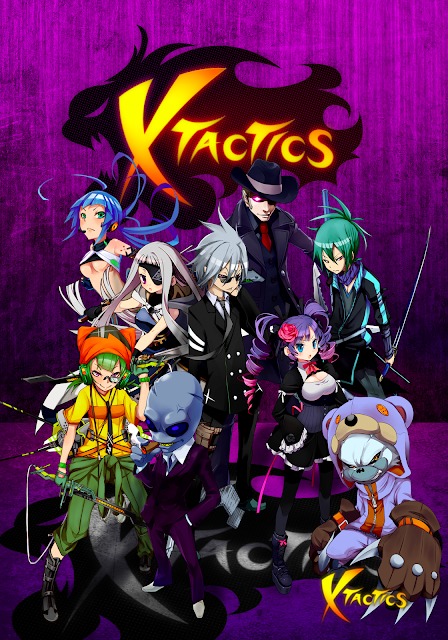 X-Tactics is a unique game from the moment you read it's description. By a Japanese indie studio founded by veterans from Square Enix, Sega and Capcom, GAMKIN, Inc's X-Tactics combines fighting game and tactical RPG mechanics in an location-based world full of government spies and secret agents. As someone who plays a lot of JRPGs but hasn't quite ventured much into the tactical side of the genre, I was worried this kind of gameplay initially may be too complicated for my turn-based RPG mind at first, but X-Tactics' use of original and innovative game mechanics made the gameplay intuitive and most importantly, fun. Using a variety of gameplay mechanics, everything blends together into a seamless experience full of challenging levels and humourous characters in X-Tactics' entertaining tactical experience for players on the go. 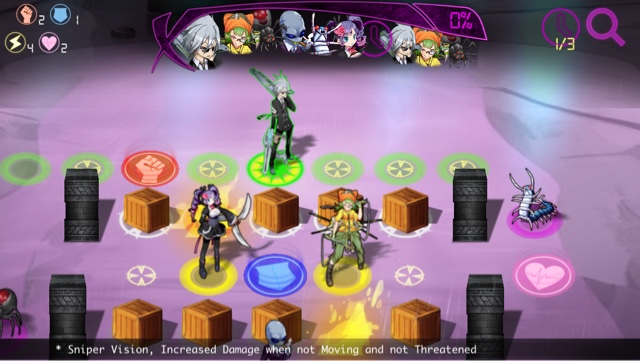 When I first booted up X-Tactics, seeing the somewhat intricate mechanics in X-Tactics initially had me worried this game was quite complicated. For RPG players, X-Tactics adds a layer of complexity to the usual choose an ability and cast fare, but in a smart and surprisingly intuitive way. Battling with a team of up to four characters, your party works towards various goals, such as clearing a field of enemies or staying alive for a specified amount of enemy waves. When targeting an enemy, a fun timed mini-game begins where you use the touch screen to link together combinations in order to attack or use abilities while dodging any moving blocks from the enemy that could cancel your attack. After this, you need to hit a target at the right time in order to determine how much you'll pierce the enemy's defenses. The rush to get the right combo in the small amount of time was much like the thrilling experience of frantically trying to execute a combo in a fighting game. Thinking about which ability would be easiest to cast for each random boost layout within the time limit was a fresh and exciting approach that felt really unique and I loved how well this kind of system took full advantage of the smartphone's touch screen. 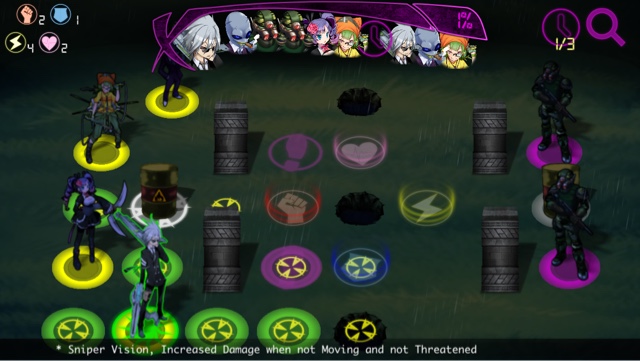 Another unique aspect of X-Tactics is the way it incorporates time and weather. When playing during the daytime on a sunny day, enemies like zombies have Sunburn and are much easier to tackle than if you play at night or on a rainy day when they're stronger. I thought this was another unique and interesting gameplay feature, although it wasn't something that really effected how I played the game. I didn't feel compelled to play at a certain time of day, but I did consider the effect either a welcomed boost or challenging handicap depending on if the effect was in my favour or not.

Missions in X-Tactics are divided into two parts - Story Missions or GPS Missions. Story missions explore the fun adventures of X-Tactics' cast of agents in short conversations between the characters that give context to the missions they're used in. Because of the small length of these pre-mission conversations, the story is fairly light in depth but what's lacking in depth is made up for with lots of quick and amusing humourous banter from the eccentric cast of characters. Every character is a little quirky in their own way, such as Goicci the alien who randomly sprouts Italian phrases like 'Mamma mia!' or the ever so feisty opera singer-turned-agent Astrid and her pet panda KuKu who just so happens to be assassin trained. All characters are complemented by really nice visual character designs that perfectly suit the game's aesthetic and their individual personalities. I usually prefer a deeper story for my RPGs, however I found the shorter scenes charming and better suited to a handheld device since I was usually playing the game on the go. 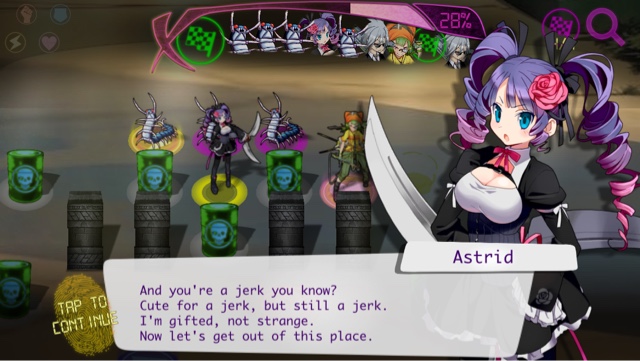 There's a full party of characters to unlock and enough Story Missions in X-Tactics to amuse those playing the game, especially when you count the extra story missions included in the regularly updated Event Missions. GPS Missions can also be played, which utilize the smartphone's location to generate missions, sometimes including special event missions. Some of Event Missions cost in-game Cash, which can usually be earned from missions, signing in regularly or as a reward for watching small video clips (usually ads for other games). Event Missions give you a chance to try extra characters that can be purchased with X-Coin, the far rarer in-game currency. X-Tactics is playable without paying any money since the app is free, but characters featured in events tended to be Premium Agents, which required spending X-Coin. As of recently, X-Coin can be obtained from GPS Missions or bought with real money. Since X-Coin is uncommon enough that I didn't find any in my time playing, purchasing some of these extra agents may be challenging for those who want to play the game entirely free. However, I do like that it's an option rather than a necessity to pay money for in-game extras, but I hope that more free agents (or ways to win them) are added in future.

My time playing X-Tactics was 90% bug free, which was great since most of the time I played I could enjoy the game without issue. In fact I only encountered my first bug a few days ago after a recent update, specifically a bug that caused a description box to stay on the screen longer than it should have. I'm not too worried about this bug sticking around though, as the game noticed and reported the problem itself. Since X-Tactics is being actively supported with updates and extra missions, I'm confident this shouldn't be an issue for too long and as it was my first error within 6 or more versions of the game (I played between version 3.8 to 4.4), I would still say it's a mostly bug-free experience. 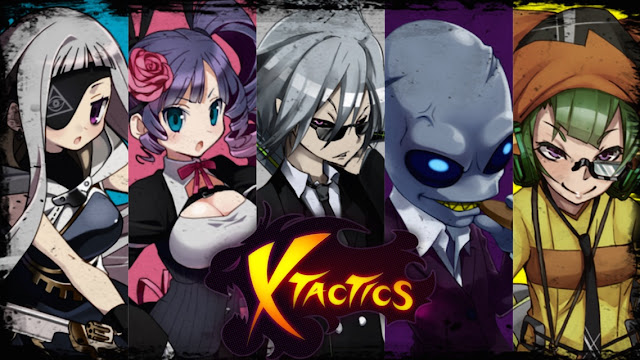 X-Tactics' unique spin on RPG mechanics and it's quirky characters make it a standout mini-RPG for mobile devices. The addicting thrill of putting boosts on my attacks and the fun humour made it an enjoyable experience that had me excited to play it every time. Since the game is regularly updated, I'm excited to see what other eccentric characters and challenging levels will be added in the future. X-Tactics is a great, innovative experience for anyone looking for deeper style of gameplay on smartphones and fun, tactical RPG missions on the go.

Score: 8/10
With it's unique gameplay and colourful character banter, I really liked the way X-Tactics gameplay blends genres into something original. I can't wait to see what's added in the future (and to get KuKu into my party)!

Will you try X-Tactics? And if you have, what did you think?
Leave a comment below, send me a tweet at @JRPGJungle, hit me up on the JRPG Jungle Facebook page and let's talk!

Notes: In the interest of transparency, information about this game was sent to me for review consideration, but I can promise this review 100% honest and written without bias.
Also, smartphone games are regularly updated and changed. My opinions about this game are based on the condition of the game at the time this review was released and may not cover any future important changes to the app.
Posted by JRPG Jungle at 03:00