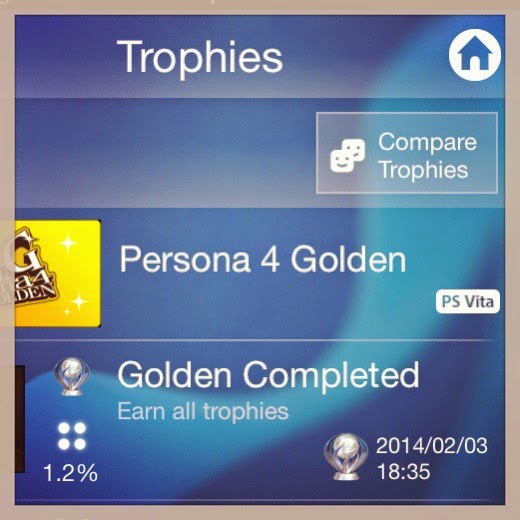 I mention Persona a quite a lot. I have my reasons - it's my favourite JRPG that I've discovered recently and it's different to anything I had ever played. I've played many games but I don't think I've played one with such rich complexity. Seriously - a game set in a high school that has any kind of complexity deserves respect. But I'm not the only who knows Persona is special. Persona is heavily popular, with Persona 4 Golden being one of the top games sold for PS Vita in Japan and is also growing in popularity around the world.

But you probably know that if you're reading this post. Or you're curious. Be warned: This platinum trophy isn't just for people who casually enjoy the game. It requires dedication and quite a bit of planning. It's certainly more brutal than any beef bowl!

First thing you should know about this Platinum is that it requires multiple playthroughs. You can get it on two - in fact, IGN has a brilliant guide for that. Just don't do what I did - I messed up my first trophy playthrough by not paying attention and had to do it again. It took me three or four plays (and a shameful amount of hours compared to other peoples) to get the platinum. The most important thing I can tell you is be ready to plan. You will see why below.

Here's how I did it, but please note: this isn't a step by step guide. Consider it more of a 'learn from my mistakes' kind of post :):

First playthrough: I wasn't attempting the platinum yet, this was just me falling in love with the game. I did manage to get the apparently difficult Hardcore Risette Fan trophy which I don't understand any of the fuss about. I just did this by training equally. To do that, every five levels in a dungeon I would check my characters levels and if anyone was falling behind, I would exit the dungeon, swap my party around to accommodate the lower level characters (fuse some Persona's while I was at it) and go back. Because each character has different attacks, this triggered all of Rise's phrases.

Second playthrough: I concentrated on the bookworm trophy successfully and wasted time trying to get the compendium trophy until I realised I couldn't do this without completing all the social links. I also finished the Marie stuff this time.

Third playthrough: Started the Social link trophy. Stuffed this up and had to restart halfway. I kept hitting wrong question answers and not equipping the right personas. I didn't notice until around November in the game. Make sure you're always equipped with the right personas, picking the right answers when you can and instead of dungeon crawling/grinding when no one wants to hang out, use the shrine. It's a....blessing :)

(Spoilers incoming!! Only on trophy names and descriptions, nothing story related.)

Fourth playthrough: By this playthrough, I knew the game's and the tricks. I was a P4G veteran, if you will. I made sure I used the right answers, on the right days, with the right Personas for the right social link and ended up with a day or two to spare in the end part of the game which felt insane. All this work was heavily rewarded with the true ending and also an extra something after the credits. And of course the shiny, beloved platinum.
Also in this playthrough, I did the 'One Who Has Proven Their Power' trophy on Very Easy. I found Easy too hard so I allowed myself to cave and switch the difficulty (horray for New Game Plus!). You will receive the trophy no matter what difficulty you win with.
I also got the 'Power of Truth' fusion trophy, the fishing master with some tricky time management and the 'Legend of Inaba' trophy.

The hardest trophy was definitely 'One Who Has Proven Their Power' on any other mode than Very Easy. It's a tough battle even with everyone on level 99 and to anyone who does it on Very Hard, you are a better gamer than I.

Easiest are all the story related ones. Also as I mentioned, with the way I play I had zero problems with the Hardcore Risette Fan trophy.

All of this took me 300 hours and while I enjoyed every minute of it, it doesn't have to be this way! Plan your gameplay, read guides, don't underestimate any social link time and the importance of answers and Personas. And most of all, have fun. I loved getting this Platinum - I will never regret exploring this world. There are many surprises that are bound to make you smile so if you're game, I challenge you to Platinum this wonderful, wonderful game.

Persona 4 Golden is available at Play-Asia.com.
Posted by JRPG Jungle at 04:30